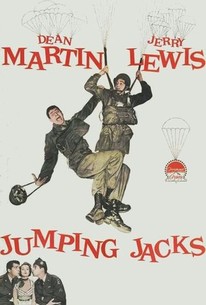 Although The Stooge had been filmed right after Martin and Lewis' Sailor Beware, the film was temporarily shelved so that the team could continue their winning streak of military comedies with Jumping Jacks. This time, Dean Martin plays Chick Allen, a paratrooper-in-training whose commanding officer intends to do away with all camp variety shows. In desperation, Chick sends for his old nightclub partner Hap Smith (Jerry Lewis) to change the CO's mind. In order to gain entry to the military base, Hap is forced to pose as a GI, and thus the plot proper gets under way. Most of the "awkward squad" gags are straight out of Abbott and Costello, with Lewis messing up at each and every turn while Martin lags behind for damage control. The film concludes with a routine from Abbot and Costello's Keep 'Em Flying, wherein Martin and Lewis bail out from a plane in flight, with one parachute between them. Robert Strauss repeats his Sailor Beware duties as Lewis' irascible topkick, while nominal leading lady Mona Freeman does practically nothing magnificently. Dean's songs include the deathless "Do the Parachute Jump".

I only know of two Jerry Lewis I've seen, this one and "The Geisha Boy." I enjoyed the latter a lot more, and remember much more from it. But this one was entertaining as well.