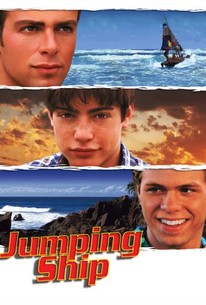 The three Lawrence brothers -- Joey, Matthew, and Andrew -- join forces for this made-for-TV adventure, in which Joey and Andrew reprise their characters from the movie Horse Sense. Jake Hunter (Matthew Lawrence) and his young friend Tommy Biggs (Andrew Lawrence) are invited to a luxury island resort for a vacation, and Jake gets the idea of hiring a boat to take them there so they can get some deep-sea fishing in along the way. The boat, piloted by Tommy's old cohort Michael Woods (Joey Lawrence), turns out to be a dangerous rust bucket, but that soon proves to be the least of their problems when a crew of modern-day pirates attempts to take over the ship, forcing the three passengers to abandon ship and take cover on a nearby island. Jumping Ship was produced for The Disney Channel, where it premiered on August 17, 2001.

It's a gimmick that works as passable family entertainment for now, but it won't have much of a shelf life.

There are no featured audience reviews yet. Click the link below to see what others say about Jumping Ship!