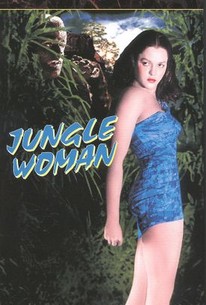 In this campy horror outing, the first of two sequels to Captive Wild Woman, exotic Acquanetta, plays a sexy jungle woman with a real problem. Every time she feels lust, she literally goes ape--and not the cute circus kind. A doctor finds her in the jungle, tranquilizes her and takes her back to his lab where he begins testing her. Unfortunately, something goes terribly wrong and she dies. The scientist is charged with murder. In court he tells his bizarre tale via flashback (which includes scenes from the first film).

An absurd amount of recycled footage and a general air of tedium.

There are no featured reviews for Jungle Woman at this time.