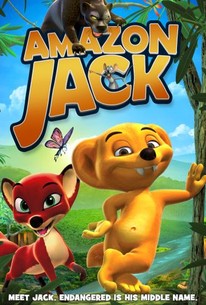 This Danish-language, CG animated romp concerns a gorilla named Jungo - an endangered species whose life is consistently put at risk by the prowls of gun-wielding human hunters. An easy solution would be to relocate. Problem is, Jungo would rather stay in his natural habitat, because only there can he spend time with his paramour, Rita, and enjoy the tasty treat of Dellekaj's meatballs. One day, the unthinkable happens: Jungo is captured and transported to another locale, called Junglandia. In desperation, his buddies pool their efforts and embark on a perilous journey to bring him home again.

There are no featured reviews for Jungledyret Hugo: Fræk, flabet og fri (Jungo Goes Bananas) at this time.