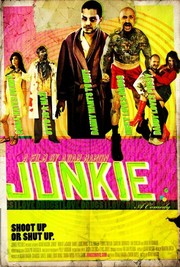 Robert H
March 28, 2015
What a surprising little film this was. Complete with disfunctional families, relationships, drugs, tatoos, zombies, dealers, and lots of bizarre, Junkie takes the viewer down a trip that is clearly heavily influenced by the film Fight Club.
The acting is quite good even if it is a bit over the top at times and caricaturish at others.
My biggest problem was with the score. I don't think it worked on any level. It didn't feel like it fit at all. While there are elements of comedy in the film, the score seemed to think it was playing while a circus was on screen or clowns were performing or something. It was just too whimsical for me and really detracted from the film imo.
Junkie plays better than any trailer could ever show. It's a tad serious, a tad kooky, a tad unique, and yet a little too familiar. It's not for everybody but I found myself enjoying it well enough considering it's not very funny, not filled with action, isn't exactly gory, not quite a horror flick, and not the drug induced funfest of say a film like Trainspotting. But I still liked it! :)

Ryan J
½ November 22, 2013
Danny lives in his dead mothers home with his brother Nicky, both are junkies but Danny is trying to break the habit, which is very hard when Nicky is begging and pleading for Danny to ring someone up to score. The film is original and pretty whacked out in its depiction , it has some interesting moments and it's a decent trip into the mind of someone trying hard to break the habit but has temptation and a fucked up family trying to ruin him. Very bleak comedy. Interesting.

F B
½ November 11, 2013
What an absolute load of rubbish. Maybe if you are a drug user this might make sense but I was just left speechless at the monotonous drivel that took away 88 minutes of my life.
Page 1 of 1