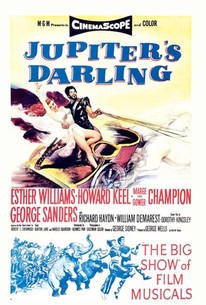 Esther Williams' long association with MGM came to an abrupt end with Jupiter's Darling, which even she will admit was her silliest film. Based on Robert Sherwood's satirical play The Road to Rome, the film cast as Williams as Amytis, fiancee of vacillating Roman statesman Fabius Maximus (George Sanders). When it appears as though the forces of Hannibal (Howard Keel) will conquer Rome, Amytis takes it upon herself to halt the invasion. In the process, she and Hannibal embark upon a tempestuous romance, much to the consternation of the barbarian general's aide-de-camp Mago (William Demarest) and the bemusement of Hannibal's official chronicler Horatio (Richard Haydn). A subplot concerns the romance between Varius (Gower Champion), who tends Hannibal's fabled elephants, and spunky slave girl Meta (Marge Champion). Somewhere along the line Williams performs a water ballet with "living statues", and Varius and Meta come up with a herd of pink elephants. The Burton Lane-Harold Adamson songs are as forgettable as the film itself. Curiously, Jupiter's Darling opened to good reviews, but the film was killed by word of mouth.

Michael Dugan
as Guard
View All

There are no critic reviews yet for Jupiter's Darling. Keep checking Rotten Tomatoes for updates!

There are no featured audience reviews yet. Click the link below to see what others say about Jupiter's Darling!