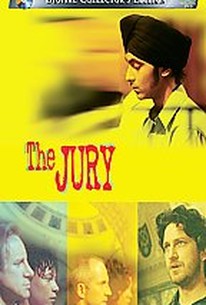 First telecast in the U.K. on February 17, 2002, the five-part British miniseries The Jury probes the workings of justice from the viewpoint of the 12 men and women chosen to determine the fate of a Sikh teenager, accused of murdering a white classmate with a ceremonial sword. This racially volatile situation is first placed in the hands of renowned attorney George Cording (Derek Jacobi), who is defending young Duvinder Singh (Sonnell Dadral), and relentless crown prosecutor Gerald Lewis (Antony Sher), better known as "The Bastard of the Bailey." But as mentioned, the focus is on the jurors, as diverse a group as one is ever likely to meet. Among the selected dozen are Rose (Helen McCrory), an unhappily married beautician; Johnnie (Gerard Butler), a recovering alcoholic; Marcia (Nina Sosanya), a single mother who tends to allow herself to be intimidated into making snap judgments; Peter (Michael Maloney), a brusque self-made businessman; Charles (Stuart Bunce), a Catholic seminarian uncertain of his calling; Elsie (Sylvia Syms), a lonely old widow; and Jeremy (Nicholas Farrell), a chronic gambler. How will the jurors' personalities affect the outcome of the case -- or, for that matter, the dissemination of facts? For its United States premiere on April 6, 2003, The Jury was beamed out by PBS as part of the Masterpiece Theatre anthology. ~ Hal Erickson, Rovi

There are no critic reviews yet for Jury. Keep checking Rotten Tomatoes for updates!

There are no featured audience reviews yet. Click the link below to see what others say about Jury!