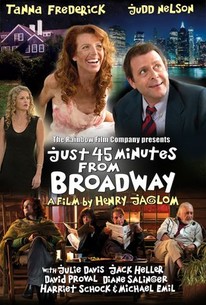 Whether trodding the boards for paying audiences or performing at the kitchen table for her theatrical family (mother Diane Salinger, father Jack Heller, uncle David Proval, boarder Harriet Schock) the only place Pandora Isaacs (Tanna Frederick) has ever felt truly safe and entirely at home is onstage. Like so many actors she is not completely sure about the difference between real life and the theater and - as she willingly admits - she really doesn't want to. Stinging from a recent romantic break-up, she retreats to the safety of her parents' ramshackle upstate country house - just 45 minutes from Broadway- where her non-theatrical sister (Julie Davis) and her sister's non-Jewish fiance (Judd Nelson) are also arriving for the weekend and the family's yearly Passover Seder, which is presided over by another uncle (Michael Emil). Family secrets, sibling rivalries and the possibility of true love as rare as a blue bullfrog all emerge, but at what cost?

George ... disdains working on TV or in dinner theater. Compared to this movie, however, these would be preferable alternatives.

You will either laugh or cringe, depending on your enjoyment of comic melodrama (the kind view) or distaste for overindulged actors (the not-so-kind view).

Altogether, it comes to resemble theater filmed by Paul Greengrass.

Though Jaglom intends for us to be charmed by show folk, the amateurish performances and perennially misjudged direction wind up portraying them instead as boundlessly needy narcissists.

Henry Jaglom applies what must by now qualify as a tradition of pointless agitation to the disruption of theater. Unsurprisingly, the results are disastrous.

The boldness is welcome, the execution awkward.

Having already worked on four of Jaglom's films with more on the way, the Iowa-born Frederick has an uncanny knack for matching rhythms with her scene partners.

Self-indulgent drama in which braying actors spout utter twaddle about the Thea-tah.

If you want a fly-on-the-wall view into the private lives of theatre royalty, 'Just 45 Minutes from Broadway' is the movie for you.

Self-consciously cribbing from Chekhov by way of Robert Altman, the filmmaker convenes an extended family of stage actors at a decaying country house in New Rochelle, where the Ambien-enhanced emotional pitch lingers north of perpetual hysteria.

An investment in theatrical self-indulgence with diminishing returns.

There are no featured reviews for Just 45 Minutes From Broadway at this time.