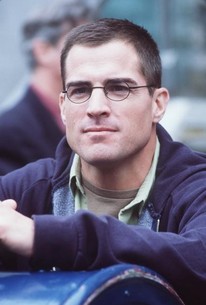 Just a Walk in the Park Photos

Adam (George Eads) makes his living as a dog walker for the wealthy New Yorkers who live near the Central Park district. So dedicated is Adam to his work that his family and friends are worried that he will never emerge from his professional shell and find a suitable wife. At present, Adam is apartment-sitting for one of his best customers, millionaire executive A.J. Preston. While thus employed, the hero "meets cute" with fellow dog fancier Rachel (Jane Krakowski), who jumps to the obvious conclusion and assumes that Adam and A.J. Preston are one and the same. Smitten by Rachel, Adam wonders if he should tell her the truth and risk losing her affections. By the time the plot is resolved thanks to the intervention of Adam's agoraphobic neighbor Selma (Brenda Vaccaro), the plot has taken many an unexpected twist and turn, including an episode involving a mysterious Chilean businessman and a strange package. Filmed in Montréal under the title The Dog Walker, the made-for-cable Just a Walk in the Park premiered over the ABC Family Channel on August 18, 2002.

Critic Reviews for Just a Walk in the Park

There are no critic reviews yet for Just a Walk in the Park. Keep checking Rotten Tomatoes for updates!

Audience Reviews for Just a Walk in the Park

I pretty enjoyed this Movie in spite of all the same sort of Movies out there, Man and Dog meet a Girl in Central Park who has a Dog too and they fall in love, one of them has a Secret and so on, but still watched it. I think it was because of George Eads. For a Change I wanted to see George Eads in a Movie A ROMANCE. I was not dissapointed at all. He can be funny.

Just a Walk in the Park Quotes