Just Around the Corner1938 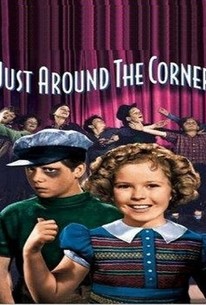 Just Around the Corner Photos

Just Around the Corner is the film in which little Shirley Temple ends the Depression all by herself! The story starts realistically enough, with 10-year-old Penny Hale (Temple) sharing a basement apartment with her widowed father Jeff (Charles Farrell, in his final Fox film). Once a prosperous architect, Jeff has been working as a hotel janitor-engineer ever since the Wall Street Crash. Ordered by pompous hotel concierge Waters (Franklin Pangborn) to keep her place, Penny nonetheless has fun wandering the lobbies of the posh establishment under the watchful and protective eyes of her friends, Kitty the maid (Joan Davis), Gus the chauffeur (Bert Lahr) and Corporal Jones the doorman (Bill Robinson). Having been told by her dad that the only person who can pull the country out of the Depression is Uncle Sam, Penny becomes convinced that goateed billionaire tycoon S. G. Henshaw (Claude Gillingwater Sr.) is Uncle Sam come to life. Charming her way into the heart of the irascible Henshaw, Penny convinces him to help the economy get started again. Not only does Uncle Sam accomplish this by creating thousands of new jobs, but he also manages to give Penny's father Jeff a new start in life, much to the delight of Jeff's sweetheart Lola (Amanda Duff). The film's highlights are Shirley Temple's always-delightul dance duets with Bill "Bojangles" Robinson; less easy to take when seen today is the closing "Buttons and Epaulets" production number, performed by a chorus of servile blacks. ~ Hal Erickson, Rovi

Marilyn Knowlden
as Gwendolyn
View All

Critic Reviews for Just Around the Corner

The tepid melodrama doesn't work, but there's charm in perky Shirley's performance and her bouncy musical numbers with Bill Robinson.

Audience Reviews for Just Around the Corner

This was one of the more mediocre Shirley Temple movies.

Just Around the Corner Quotes