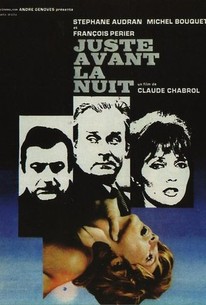 In this French New Wave crime drama, set in a suburb of Paris, a murderous adman is talked out of telling the police that he strangled his mistress by his wife. The guilt-ridden fellow then tells his best friend, his late mistress' husband. He too calmly suggests silence even after the ad man tells him that the relationship involved sadomasochism and the strangulation came during a passionate moment. Although the confessions bring him temporary comfort, his guilt is such that eventually he quietly takes an overdose of sleeping medicine. His wife dutifully prepared the deadly draught for him.

Marcel Gassouk
as Barman
View All

[Director] Claude Chabrol is a master at showing the macabre murkiness that lies just below the surface of ordinary lives.

There's a strange, dreamy aloofness about this film that makes it difficult to invest in emotionally, but it's a phenomenally dry comedy about a murderer's quest for atonement, in the face of bourgeois indifference to his crime. When a sadomasochistic game goes too far, Charles, a married man, strangles his lover, the wife of his best friend, and then does battle with his guilty conscience. Though it begins and ends brilliantly, the story does sag in the middle, before Charles' guilt gathers self-destructive momentum, and it suffers from a lack of suspense, attributable to the other characters' apathy toward the crime. "Juste Avante la Nuit" agreeably reunites Michel Bouquet and Stéphane Audran, a couple of years after Chabrol's superb "La Femme Infidèle"; Bouquet is marvellous but Audran isn't really given enough to do this time around, unfortunately. Flawed but fascinating.