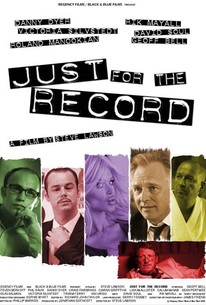 Danny Dyer and Sean Pertwee headline this mock documentary comedy examining the tangled aftermath of a bungled movie shoot. The movie was titled "Just for the Record," and it had all the ingredients of a bona fide hit; the director was an eager up-and-comer, the stars were cast, and the new digital camera was cutting-edge technology. Then, it all just fell apart. One year later, a series of interviews reveal that it wasn't just one man's incompetence that sunk "Just for the Record," but a disastrous series of events brought about by everyone involved: the producer cared more about chasing women and swilling booze than making a quality film; the writer managed to read an entire library's worth of screenwriting books without learning how to tell a story; and the manic depressive editor couldn't keep it together long enough to make even one confident cut. Over the course of the cramped, rushed, underfinanced two-week shoot, the project simply collapsed. Fortunately for aspiring micro-budget filmmakers, the entire fiasco was captured on camera so they can avoid making the same mistakes as this crew. Just for the Record co-stars Rik Mayall, Steven Berkoff, and Victoria Silverstedt.

Critic Reviews for Just for the Record

There are no critic reviews yet for Just for the Record. Keep checking Rotten Tomatoes for updates!

Audience Reviews for Just for the Record

If by any chance you are expecting a quirky, gangster comedy film... think again! If however, you are looking for a post production docu-drama with strippers then you are in for a treat. Do not be fooled by the box, its synopsis or pre-conceived ideas of Danny Dyer, because it's sod all like that at all. What a giggle, just really not what was expected! Wehey, I'm the first on here to see it to!

Just for the Record Quotes