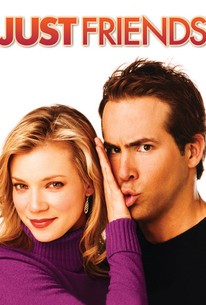 Critics Consensus: There are moments of mirth in this overly broad comedy, but mostly, Just Friends is just not that funny.

Critics Consensus: There are moments of mirth in this overly broad comedy, but mostly, Just Friends is just not that funny.

Critic Consensus: There are moments of mirth in this overly broad comedy, but mostly, Just Friends is just not that funny.

When Chris, a likable, high-school loser, finally gathers the courage to reveal his love to Jamie -- the girl of his dreams and a super cool cheerleader -- she rejects him, saying she just wants to be friends. So, he moves across the country and transforms himself into a selfish, womanizing and successful music executive. But, 10 years later, circumstances bring him back to his home town and fate reconnects him with the "just friends" girl of his dreams. Suddenly, Chris has the chance to undo the past, but unbelievably, he finds it more difficult to romance Jamie than it was 10 years ago. Can one escape the clutches of the "friend zone?" Is it possible to go from "just friend" to boyfriend? Chris is about to find out the hard way.

Mike Simpson
as Preacher
View All

This movie had some good ideas, but never gelled.

Despite a rich premise, Just Friends ultimately fails to live up to its early potential, settling into broad comedy that shortchanges the romantic possibilities.

Funnier than it has any right to be, thanks to Reynolds’ charisma and Faris's bubbleheaded blonde.

There are other flaws, but for the most part, Cruel Intentions helmer Roger Kumble delivers an enjoyably anarchic romp.

The film feels just a few degrees left of sanity.

The appealing (albeit familiar) premise is employed to distressingly (and predominantly) lackluster effect by Kumble...

Worth watching just for Christopher Marquette's hilarious turn as Chris's pain-in-the-neck brother, this obnoxious comedy has a generous helping of natural, surprising laughs amid the bumptious stupidity.

Despite the best efforts from Reynolds and Faris, the film winds up being just as conventional as any of the genre. [Full Review in Spanish]

No matter what filmmakers intend, fat suits always take over the movies they're in.

Not particularly original, Just Friends works largely due to Reynolds' screen charisma and comic timing, but it does work, and works well.

Funny rom com about a guy who is in love with his best friend. He leaves high school to become a successful music producer. Due to an incident with his plane he ends up in his hometown where he meets his first love again. Everything goes wrong and he nearly loses her to another guy. The Christmas garden scene is hilarious. Ryan's singing and dancing gestures are golden moments.

The main problem with this as a romantic comedy is that Chris is such an ass you don't want to see him with Jamie. I do like this - Amy Smart is a good actress and Anna Farris is funny here too. I also find Chris's mum quite funny and it is a good Xmas movie being set that time of year. But as a romance it is a fail.

Just Friends is a fairly comedy that exceeded my expectations a bit. If you're looking for a fun comedy, then this is your film. Just Friends is not a perfect comedy, but for what it is, it definitely brings on good laughs. Like I said, this one exceeded my expectations, and I didn't think it would be this funny, but it was. The jokes aren't excellent, but for the most part, there good enough to make you laugh a few times. This is a good film and it does some memorable moments. The cast do a fine job in their roles, and they're all amusing to watch on-screen. There are things that they could've improved upon here and there, but overall the filmmakers succeeded at delivering a funny film. The film has its low points, but the use of comedy keeps the film from faltering and in the end, this is an underrated comedy flick if you enjoy mindless comedy, Give Just Friends a view. I did, and was surprised. Not the best comedy, but not the worst either. Just Friends is really the type of comedy film that delivers a good time, decent laughs and is one of those films that shouldn't be easily dismissed. I enjoyed for what it is, despite not being a great film, I had fun watching this film.