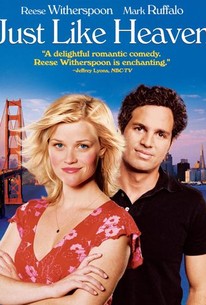 Critics Consensus: Delightfully sweet like a lollipop, Just Like Heaven is a dreamy romantic comedy that may give you a toothache when it attempts to broach difficult end of life issues by throwing a cherry on top.

Critics Consensus: Delightfully sweet like a lollipop, Just Like Heaven is a dreamy romantic comedy that may give you a toothache when it attempts to broach difficult end of life issues by throwing a cherry on top.

Critic Consensus: Delightfully sweet like a lollipop, Just Like Heaven is a dreamy romantic comedy that may give you a toothache when it attempts to broach difficult end of life issues by throwing a cherry on top.

A couple who live on different sides of the divide of life and death discover just how many boundaries love can cross in this romantic comic fantasy. Elizabeth (Reese Witherspoon) is a hardworking and dedicated medical resident who, after 20 hours on duty, is heading home when she falls asleep at the wheel of her car and is involved in a fatal auto accident. Several weeks later, a man named David (Mark Ruffalo) takes over the lease on Elizabeth's apartment, but he discovers that she hasn't quite vacated the building. Elizabeth's body may be dead, but her spirit is still quite lively, and her ghost is insisting that the apartment is still hers...and that she wants him to move out. David brings in Darryl (Jon Heder), an eccentric man who claims to have psychic powers, to help sweep Elizabeth's spirit out of the apartment, but she refuses to budge, certain that she can't be completely dead, despite all evidence to the contrary. As Elizabeth and David try to share the flat, they discover that their differences aren't as great as they once imagined, and they become attracted to one another. But will Elizabeth's spirit stay in the land of the living long enough for their romance to go somewhere? Just Like Heaven marked Jon Heder's first feature film role after his breakthrough appearance in the independent hit Napoleon Dynamite.

Marilee Lesley
as Elizabeth in Coma

... it is refreshing to see a love story played out with sincerity.

Well, I did remember one thing, and that was how snazzy the shoes were that Witherspoon wore for nearly the entire picture. Getting a pair of those wouldn't just be great, it might just be heaven.

Starts out glib and gimmicky but later digs surprisingly deep.

It's corny, it's somewhat predictable, but it's also very sweet, it's funny.

In the face of Witherspoon's unrepentant charms, it's very difficult to resist.

It's not like it reinvents the wheel... but I think it is so heartwarming and such a good example of how to do romantic comedy right.

Just Like Heaven is a typical romantic comedy that stumbles on the problems of being not particularly funny or interesting. It could have been truly heartwarming, but is so heavy handed here that the final result is merely sentimental pap.

Just Like Heaven" perpetuates the Frisco curse that not one great movie has been made in the hilly city since Alfred Hitchcock's Vertigo in 1958.

Kudos to Witherspoon and Ruffalo for generating enough screen chemistry to insure a teary-eyed finale that'll make you forget the fact that you're watching a shameless rip-off.

One of the best times I've had at the movies in a while. It's not perfect. It's not very deep. But it's a whole lot of fun and even a little moving.

While the picture adheres to romantic-comedy formula, it's not entirely formulaic, and the actors, who appear to be having fun, give it a bright and undeniable appeal.

It is fun watching a ghost who doesn't know they are a ghost. At one point, Reese was arguing that she was completely normal while her ghostly image is being split in half by the dining room table.

This was a funny and sweet movie. Although the story is a bit weird but it was entertaining as well. Especially the priest part.