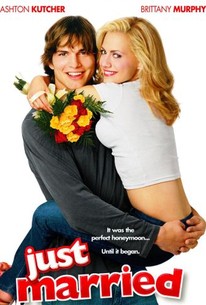 Critics Consensus: Just Married's plot is predictable, and the overdone pratfalls get tiresome.

Critics Consensus: Just Married's plot is predictable, and the overdone pratfalls get tiresome.

Critic Consensus: Just Married's plot is predictable, and the overdone pratfalls get tiresome.

Can a new marriage survive meddling friends, disapproving families, and some of the worst accommodations in Europe? That's the question posed in this broad comedy. Tom Leezak (Ashton Kutcher) is a regular guy who likes sports and beer and tries to make ends meet working as a nighttime radio traffic reporter. Sarah McNerney (Brittany Murphy) is a beautiful young woman from a wealthy and privileged family who is trying to make a name for herself as a writer. Tom and Sarah have seemingly nothing in common, but that doesn't stop them from falling in love. Sarah's family doesn't much care for Tom's boorish ways, and Tom's buddies think Sarah is too highbrow for him, but, if anything, this makes the couple all the more determined to be together, and they decide to get married and head off to Italy for a month-long honeymoon despite the pleas of those closest to them. However, even after the knot is tied, Sarah's former beau, Peter Prentiss (Christian Kane), is dead set upon breaking up the happy couple, though as it turns out, a seemingly endless stream of bad luck and post-marital jitters may do the job for him. Just Married was written by Sam Harper, who claims to have loosely based the script on his own experiences on an ill-starred European honeymoon with his wife; fortunately, the couple's marriage survived the experience. ~ Mark Deming, Rovi

Timmy Fitzpatrick
as Kid in the Bathroom

Immature and annoying; the jokes are tired.

Murphy has no comic timing and Kutcher overcompensates.

Resorts to pratfalls and other familiar bits that, while occasionally funny, somehow make it all just a little too formulaic to really lock on.

Rubbery-faced Kutcher is a nice match for Murphy, and their chemistry keeps the movie afloat even when the gags stretch thin.

[A] strained, forced, uncomfortable and unfunny attempt at comedy.

The truth at the heart of Just Married is an important one -- it does take more than love to make a marriage work -- but it's not one you need to watch the movie to learn.

The outside seat-fillers at the screening happily ate up every unsurprising, unfunny second, but that doesn't mean that you have to.

Besides the sub-par script the problem is that Kutcher and Murphy have zero chemistry.

...it's the paper-thin characters and utterly predictable storyline that does the film in.

Haven't seen this in about ten years. Original rating was 4, have upgraded to 5. I think this really stands up as a rom com, and is still cute and funny. Brittany really was such a likeable actress.

Just Married is a decent comedy with a few good laughs, but it could have been done far better as well. The film had potential in doing something far better, and it does fall short. In the long run, this is a film that is worth seeing only once as the jokes become stale over multiple viewings. The idea behind the film was good, but the gags just didn't hold up. The cast do a decent job in their performances, but it simply doesn't make up for a great comedic experience. The film leaves room for improvement and it deliver some good laughs here and there but it could have been better. The film suffers from a lacking script that could have been rewritten a few times. Ashton Kutcher and Brittany Murphy do what they can with the material and they pull off something entertaining. Just Married is fun, but like I said it could have been better due to its interesting ideas. This is a decent film to watch when you have nothing else better to do, and it makes for a mindless viewing experience that brings on a few good laughs, and effective moments. However this is a forgettable film that since its release, there has been far better films in this genre. Worth seeing, but there are too many underdeveloped ideas on-screen to really make it a hilarious film that warrants rewatching again and again. Expect something slightly humorous, but keep in mind that the film had plenty of wasted potential as well. Just Married is not the best rom com out there, but it certainly isn't the worst. Funny in some areas, and sketchy in others, this is a film that doesn't try too hard at being something great due to a script that reveals too many lacking, uninspired ideas.

The ending was sweet. Not that funny. But some scenes are kinda funny.