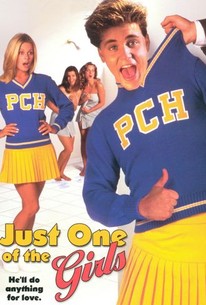 Corey Haim, the crown prince of direct-to-video films, stars in Just One of the Girls. Haim plays a teen-aged musician who is constantly being bullied. To escape his tormentors, he disguises himself as a girl. Surprise of surprises, Haim finds that he really enjoys his new identity, and decides to remain female for a little while longer just to see what develops. Also released as Anything for Love.

Alanis Morissette
as Herself
View All

Critic Reviews for Just One of the Girls (Anything for Love)

Decent script by Raul Fernandez turns done-to-death premise into an engaging time-filler aimed at a young teen audience. Originally titled "Boys Will Be Girls," it could be a lot worse.

Audience Reviews for Just One of the Girls (Anything for Love)

I love this movie! Okay, technically it is not fantastic, and even I have to admit Corey makes a particularly unattractive and unconvincing female, but it is such good fun and I never tire watching it. Just one of those feel good movies that you can watch over and over and not think too hard, have a laugh, and Corey is always watchable... real waste to think he is not with us anymore. Story is that Chris, (Corey Haim), dresses as a girl to avoid the school bully and, as it's his first day in school, he is spotted by his teacher in drag and has to attend school like that all the time. To complicate matters further, he falls in love with Marie ,(Nicole Eggert), befriends her (as a girl), and then the bully turns out to be Marie's brother. Cue all types of funny situations and misunderstandings. Whole cast is good here. None of them are winning awards, but it works in a fun light movie like this. The girl who plays Julie, Chris's sister, is also quite amusing.

Just One of the Girls (Anything for Love) Quotes