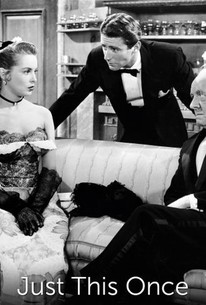 Just This Once Photos

Peter Lawford goes through his standard "rich, spoiled young playboy" paces in the MGM comedy Just This Once. In danger of squandering his entire fortune, the wastrelly Mark MacLene (Peter Lawford) is put on a strict allowance by an old family friend, Judge Samuel Coulter (Lewis Stone). To make certain that Mark stays within his weekly budget, Coulter hires pretty lawyer Lucy Duncan (Janet Leigh) to monitor the boy's spending. One of the provisions of Coulter's ruling dictates that Mark and Lucy live under the same roof--platonically, of course. Lucy agrees to this set-up; after all, she couldn't possibly fall in love with anyone as irresponsible as Mark, especially since she's already engaged to the scrupulously frugal Tom Winters (Richard Anderson). Anyone who can't figure out how this winds up should be drummed out of the theater in disgrace. ~ Hal Erickson, Rovi

Jerry Hausner
as Stanley Worth

Critic Reviews for Just This Once

There are no critic reviews yet for Just This Once. Keep checking Rotten Tomatoes for updates!

There are no featured reviews for Just This Once at this time.

Just This Once Quotes