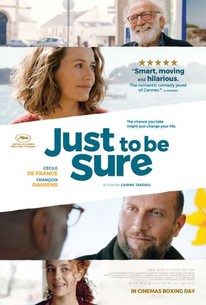 Just to Be Sure (Ôtez-moi d'un doute) Photos

Erwan, an unshakeable mine-clearing expert, suddenly loses his footing when he learns that his father is not his father. Despite all the tenderness he feels for the man who raised him, Erwan discreetly sets out to learn more about and to find his father. He turns out to be an elderly and very endearing man named Joseph, who Erwan becomes fond of. As good things come in pairs, Erwan crosses paths with the elusive Anna, who he undertakes to seduce. But one day when he pays Joseph a visit, Erwan realizes that Anna is in fact his half-sister. This bomb is even harder to defuse because his adoptive father now suspects that Erwan is hiding something from him.

Critic Reviews for Just to Be Sure (Ôtez-moi d'un doute)

Damiens floats this enterprise with just the right amount of harried Everyman appeal. De France hits a bit too abrasive a screwball note at first, but her performance gains charm in equal measure to its chemistry with her co-star.

In her third feature, director Carine Tardieu and her co-writers build a muted classical comedy of errors that Shakespeare would have recognised.

The film, in the fine tradition of Sautet's movies, throws up serious questions along the way, the principal one being the role of the father.

A charming tale of multiple quid pro quos that's as light-hearted as its subject matter is deadly serious.

Honest, delicate and without pretensions. [Full Review in Spanish]

The film is a comedy, human and wise, raised on the territory where the potentiality of the tragedy lies. [Full Review in Spanish]

In a story about fatherhood, nobody represents it better than the protagonist, François Demiens. [Full review in Spanish]

This admirably adult romantic comedy from French female director and co-writer Carine Tardieu raises a few smiles without ever being exactly hilarious.

At its best when it's getting to the heart of the various characters' emotional reactions, rather than trying to find laughs.

De Lencquesaing lends her character an appealing earthiness. De France is good, too, as the tart-tongued medic with an overdeveloped sense of responsibility.

There are no featured reviews for Just to Be Sure (Ôtez-moi d'un doute) at this time.

Just to Be Sure (Ôtez-moi d'un doute) Quotes