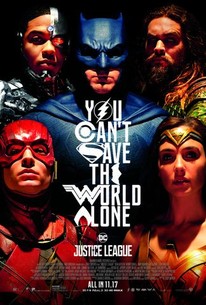 Critics Consensus: Justice League leaps over a number of DC movies, but its single bound isn't enough to shed the murky aesthetic, thin characters, and chaotic action that continue to dog the franchise.

Critics Consensus: Justice League leaps over a number of DC movies, but its single bound isn't enough to shed the murky aesthetic, thin characters, and chaotic action that continue to dog the franchise.

Critic Consensus: Justice League leaps over a number of DC movies, but its single bound isn't enough to shed the murky aesthetic, thin characters, and chaotic action that continue to dog the franchise.

Fueled by his restored faith in humanity and inspired by Superman's selfless act, Bruce Wayne enlists the help of his newfound ally, Diana Prince, to face an even greater enemy. Together, Batman and Wonder Woman work quickly to find and recruit a team of metahumans to stand against this newly awakened threat. But despite the formation of this unprecedented league of heroes--Batman, Wonder Woman, Aquaman, Cyborg and The Flash--it may already be too late to save the planet from an assault of catastrophic proportions.

All of Snyder's DC films - Justice League included - seem more concerned with the repercussions of actions than with the actions themselves.

It's an even messier saga than Dawn of Justice, with a tiresome and whiskery macguffin in which three magic boxes must be brought together for evil, then prised apart for good.

Perhaps the new Superman is closer to what the fans wanted. But he doesn't really feel like a character anymore. He, like the rest of his movie, feels like a focus group-approved concept.

The action is exciting at times but the outcomes are predictable. Indeed, this often has the feel of a set-up movie, one made to kick off a series.

Gal Gadot's Wonder Woman got the tone right last time, which suggested things were looking up. But without director Patty Jenkins around, she's subject to the dismissive male gaze for which Hollywood's long been criticized.

The film hits a higher plateau toward its end. But by that time, it's too late. No, not too late for stopping Steppenwolf, but for making Justice League work as well as it might have.

The spectacle here isn't that special.

It feels like the cinematic equivalent of blagging your way through an exam you failed to revise for.

The problem isn't the material but the sheer volume of it.

Cribs from Avengers, Guardians of the Galaxy, and Thor films so thoroughly that it's essentially a lesser MCU installment.

The idea of a superhero crossover film was taboo twenty years ago. Everything was standalone and that's the way we liked it. Honestly, did we even really know that we wanted to see more than one comic book lead in a film back then. I don't remember myself, but once Marvel began spoon feeding us these tiny cameos in their after credits sequences that became films that had full fledged teams of superheroes it seems as though a hole that we had as movie audiences was filled. Everywhere we look now we get the news that some studio is planning a "cinematic universe" to create an entire slate of films and more importantly revenue. The main competition on comic books news stands for Marvel has been DC for decades. Marvel has some iconic characters, but DC also has characters that have been a part of popular culture since the late 1930's. The thing is that the stars have never aligned to deliver a film featuring their own team called the Justice League, other than cartoons and an awful TV special back in the 1970's. They're now trying to play catch up with a definite hit or miss game plan as they enter their fourth film Justice League. The film follows an intergalactic threat named Steppenwolf (voiced by Ciaran Hinds) whose objective is to find three cubes called Mother Boxes that will turn the Earth into his home world. It's destroying to create, ala Genesis in the Star Trek II and III arc. This is a post Superman world and Batman (Ben Affleck) has decided to not be so homicidal and build a team to work together to battle evil across the globe. Wonder Woman (Gal Gadot), The Flash (Ezra Miller), Aquaman (Jason Momoa), and Cyborg (Ray Fisher) round out the Justice League as they prepare to battle the greatest threat to this world. The idea of a Justice League film would have gotten me excited ten years ago. Now, not as much as it should have mainly due to the poor delivery of films such as Batman v. Superman: Dawn of Justice (a marquee film that is a waste of stories and characters) and Suicide Squad (a film with a good concept, but no real antagonist). Wonder Woman bucked that trend with a film that is interesting and exciting, but there was still the feeling of dread when this newest DC film came to the local Cineplex. Even before an audience saw this film the troubled production left many without hope for how Justice League was going to turn out and the verdict is that it is nowhere near a perfect film, but it is a step in the right direction being better than BvS and SS. There isn't that dark despair that punctuated those two films and it feels more like a typical superhero film that actually takes a few beats and has some comic relief. One of my main complaints about Batman v. Superman is that there were no real breaks from the constant action and darkness of characters that were developed so many years ago. Justice League manages to get some laughs, breaking up the seriousness and tension of the film, mainly with Miller's timid portrayal of The Flash, and the general bad assery of Momoa's Aquaman. These characters are more like you would want, except for Wonder Woman who feels like she has been regulated to second fiddle in this film, a shame considering her solo film was such an exciting film. What causes the problems with Justice League lie in the story. Once again we get Steppenwolf and his collection of video game sprites for our heroes to fight throughout the film, which is something that really polluted Suicide Squad. The character is better than Enchantress, but in the end it feels like you're fighting thousands of the same thing, which has become a well dulled cliché. Then there's the Superman (Henry Cavill) issue. We all knew he was going to come back in this film after being dispatched in Suicide Squad. Sadly, it really isn't very momentous and seems a bit too easy. I know characters come back in comic books all the time, but this really doesn't gel with the rest of the film. The plus is that when Superman does work out his issues, Cavill plays the character more like we are used to instead of the brooding character that was really cutting into Batman's psyche territory. Justice League is a step in the right direction for the DC Extended Universe. It is an entertaining film that doesn't feel like a two and a half hour depression screening (thankfully they kept the running time at two hours). It is not close to a perfect film, but it does stand as a popcorn movie. I have had an appreciation of these characters for as long as I can remember, so they do hold a special place for me. Hopefully they can keep going in the right direction as they move forward.

While there is finally some humor in the DC movie universe, the film suffers from the same problems that dragged the mediocre BvS down: The villain is a poorly animated CGI being that entirely kills any involvement in the story. You still come along for the characters, most of which are well portrayed. Especially Aquaman has some pretty good scenes and makes you hopeful for his coming own adventure. The story is neither particularly coherent nor interesting and Supie's return kinda meh. The showdown, once again, happens in an entirely fake CGI environment with the same fighting moves over and over. The result is still entertaining enough and sometimes even fun thanks to the actors, but one can't possibly say that this bunch of heroes doesn't deserve better films.

Following the big shoes of the success of Wonder Woman is a lot to do in today's snipe obsessed internet marketplace but, despite the many critics DC managed to fire off another winner. Are there complaints? Sure. A better villain is my biggee. Nonetheless a good job for Zack Snyder and crew. A good comic book begs the question: is it re-readable? Well this film is certainly rewatchable.