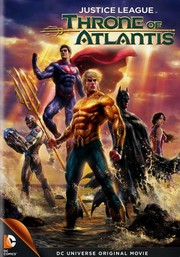 David S
½ April 24, 2021
This had a pretty solid storyline for an origin story of Aquaman. One of the better animated Justice League movies.

Eric W
December 29, 2018
Excellent animation and direction propel this fast action feature that plays like a part of a longer storyline.

Matthew D
½ July 27, 2018
The last Justice League animated movie, War, barely had any breaks in the action, here it is mercifully dialled back, allowing room to breathe and to provide more character development and even a little political intrigue. The fighting is still too blood-thirsty and the heroes to aggressive for my liking, but this outing has more rounded story for the world's greatest superheroes. Unfortunately, it's all very basic; the action doesn't have the inventiveness of past DC animation and what should be powerful emotional moments are bungled by bad dialogue and ham-fistedness, making the time invested in character development mostly wasted. It quite literally jumps the shark at the end!

Ted S
½ September 21, 2017
Should have been a solo movie and not a Justice league movie

Late R
½ August 17, 2017
The main problem with it is not so much the plot which, it seems to me, is a classic origin story, despite not doing anything new or exciting, but rather the fact that there simply isn't enough time to tell the story they wanted to without there being so much that doesn't make sense. It feels incredibly rushed leaving you with little to no time to get to know any of the characters or understand their motivations. Add to that the generic action sequences that fail to thrill and you have a nonsensical, somewhat bland and forgettable addition to the DC animated universe.

Super Reviewer
Jamie C
½ August 12, 2017
This movie does have its moments but it doesn't come close to Justice League: War, Aquamans origin story was pretty good and there was a few good action scenes too but there's too many down times and plot details to enjoy the film as much as I'd like.

Jacob M
½ February 14, 2017
Truly a 50-50 outing for WB and DC. This story bites off a bit more than it can chew by combining the origin of Aquaman with a Justice League movie. The story would have served itself better if it would have just had the origin of Aquaman without the rest of the Justice League having to show up in this film. The Aquaman only scenes are fantastic, but gets bogged down by the rest of the team trying to poke their heads in the story.

josh s
January 28, 2017
A continuation from Justice League war that branches to different parts of the DC Universe and retells the story Aqua man... and it sucks. I mean the animation looks as good as the rest of it's predecessors but it's so boring. Just take a pass when thinking about watching this movie, or ignore me and watch this film and say it's not that bad. I'm just a dude typing on a computer.

Douglas L
January 13, 2017
I really like how they are making these animated movies more violent these days. No complaints on the voice acting (except Jason O'Mara, what a terrible Batman). Although it was giving more to a character who usually is a side show (Aquaman) this movie does feel like its stretched a bit thin.

hammers9025 P
December 16, 2016
Your typical story about the atlanteans being scared of the service dwellers. Which the main antagonist frames an attack so it looks like the humans are attacking atlantis, which provokes war. The justice league are summoned to stop all the commotion. The film explores and introduces aquaman whom has no idea who is mother is. A great addition to the dc animated universe, some great animation.

Jonathon M
October 15, 2016
I liked this movie, but it should've been an Aquaman movie, it his story, the rest of the Justice League is crammed in and kind of a distraction.

Paul B
October 14, 2016
My favorite part is where Arthur saves a lobster at a bar.
Imagine saving a chicken from having her head chopped off.

Andrew M
September 4, 2016
So much better then Justice League War.... The heroes weren't all assholes and actually seemed like themselves as well as a team. Sure it still has that New 52 Superman/Wonder Woman bullshit but it's minor. And just like it should be- Aquaman is a badass.

Between this and Batman: Assault on Arkham, gotta love how the animated movies do better in under 90mins then the live action movies have been able to do in almost twice that

Jackson B
August 10, 2016
Probably one of the worst DC Animated Movie's I've seen. Seemed pretty slow and it was really boring. The villain wasn't compelling and neither was the action. I don't have much more to say about it, but it was a slog to get through.
Page 1 of 9