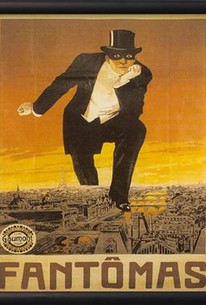 Between 1913 and 1914, French director Louis Feuillade turned out five fast-paced melodramas based upon the character of criminal genius Fantomas. The second of these was Juve vs. Fantomas. The villain's nemesis is police inspector Juve (or Jove), who is forever one step behind the masked-and-caped crime lord. In addition to his superior intellect, Fantomas is a master of disguise. Despite his heinous crimes, the audience tends to root for Fantomas as he effortlessly outwits the plodding Jove at every turn. Each of the five Fantomas films were multipart, serialized efforts, with each individual adventure picking up where the last one left off. ~ Hal Erickson, Rovi

Bizarre fantasies and unconscious desires, including the famous snakes in the bedroom scene.

All the best parts involve criminal plots so outré that delighted disbelief is the only sane response.

For something that's now 97 years old, it's a terrific, hugely entertaining film.

It's both archaic in style and strangely modern...

Part two of the French silent, serial style, cop and crook drama. This one contains an impressive train wreck scene, a creepy boa constrictor scene, and, generally, more action and thrills than the first in the series. The cast and exterior shots as well as interior set decor are effective.