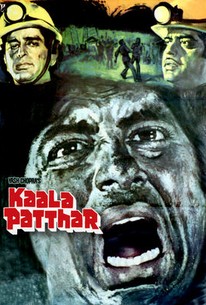 Three men become unlikely heroes in the midst of a disaster in this grand-scale drama from India. Vijay (Amitabh Bachchan) is a former Naval officer who, after a deadly episode at sea, was forced to leave the military in disgrace; humiliated and suicidal, Vijay has taken a job in a coal mine, relishing the dangerous work with an attitude that borders on the suicidal. Mangal (Shatrughan Sinha) is a convicted felon who escaped from custody and found work in the mine along side Vijay. And Ravi (Shashi Kapoor) is an engineer who is attempting to improve the deplorable conditions of the coal mines, but runs into severe interference from the mercenary owners of the facility. When disaster strikes at the mine, trapping hundreds of men below the surface, Ravi must devote all his strength, imagination, and courage to find a way to bring the men back to safety, while Vijay and Mangal struggle to help rescue their co-workers and find redemption under trying and perilous circumstances. Kaala Patthar was inspired by a real-life mining catastrophe, and director Yash Chopra brought in top-rank special-effects men from the United States to give the mine sequences the necessary realism. ~ Mark Deming, Rovi

There are no critic reviews yet for Kaala Patthar. Keep checking Rotten Tomatoes for updates!

There are no featured reviews for Kaala Patthar at this time.