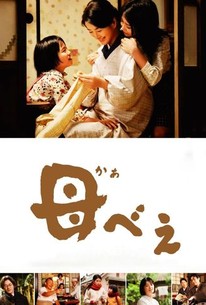 Veteran Japanese filmmaker Yoji Yamada's 80th feature film concerns a mother living in 1940s-era Tokyo who is forced to care for her two daughters alone after her husband is jailed for expressing reformist views on the Japanese invasion of China. Professor Shigeru Nogami (Mitsugoro Bando) is an outspoken man with some particularly unpopular political views, and for his role in speaking out against the Japanese invasion of China he is promptly jailed. In the wake of his imprisonment, Professor Nogami's devoted wife, Kayo (aka Kabei, played by Sayuri Yoshinaga), is suddenly relegated to the status of single mother. As Kayo does the best to care for the couple's two young daughters, her stern policeman father (Umenosuke Nakamura) proves little help. Thankfully for Kayo and the two children, the people of the neighborhood are more concerned with the well-being of her family than her husband's political views. One of the professor's former students in particular, the clumsy but well-meaning Yamasaki (Tadanobu Asano), does his best to ensure that the Nogami family is properly cared for until the day his mentor can return.

Partly because they're relatively rare, homefront movies usually offer a fresh perspective on the tragedies of World War II. That's the case once more with Kabei: Our Mother, a sad and stirring drama from the other side of the Pacific.

For those who prefer movies of substance, there are alternatives -- and I don't mean Terminator Salvation.

Yamada and crew almost go so far as to suggest that the Japanese had their A-bombs coming to them, if it weren't for the achingly sympathetic family at the film's core.

The film's comparisons of one woman's suffering to one nation's social descent aren't well drawn enough to escape its own melodramatic pitfalls.

This is not a story about lamenting the inevitability of time but rather of living in denial.

Despite its slow pace and over length, Kabei: Our Mother presents a poignant portrait of Japan in the 1940s.

Painful though it may be, Kâbê is finely crafted and totally enjoyable. Watch

Yoji Yamada's historical drama about a Japanese family's travails during wartime imperial rule teeters on the edge of melodrama, but thankfully hews to a stable and surprisingly poignant path.

[An] unpretentious, engrossing, well-nuanced and tender drama brimming with a raw and powerfully moving performance by Sayuri Yoshinaga.

Deeply powerful study of a family trying to survive repression and poverty in wartime Japan with much in common--unexpectedly--with the director's Samurai trilogy.

Yoji Yamada is one of today's most brilliant directors. I have really enjoyed his period pieces, which have brought back fun memories of classic Samurai movies. Yamada has a subtle and quiet voice which he usually uses well. Kabei: Our Mother seemed like it came from a different director altogether. Set out like a series of memoirs, the film relied heavily on an intrusive narration and episodic structure. I never felt at ease, or intrigued, by the films pace. There were segments I enjoyed, most involving Asano, who kept his emotions in the open without making them obvious. The end was also very melodramatic, with screaming and crying forcing their way in. It was all very 'bitty', but each individual 'bit' had something to enjoy.

The Japanese classicism of Ozu is alive and well in director Yôji Yamada. Sayuri Yoshinaga's complex performance as the mother in this is simply stunning