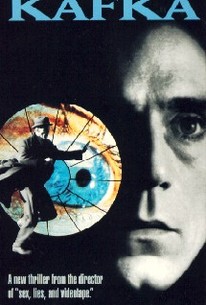 Critics Consensus: Kafka does not rise to the artistic success of its subject, struggling to approximate the nightmarish absurdity that defined the author's work despite thoughtful direction by Steven Soderbergh and a gorgeous black and white color palette.

Critics Consensus: Kafka does not rise to the artistic success of its subject, struggling to approximate the nightmarish absurdity that defined the author's work despite thoughtful direction by Steven Soderbergh and a gorgeous black and white color palette.

Critic Consensus: Kafka does not rise to the artistic success of its subject, struggling to approximate the nightmarish absurdity that defined the author's work despite thoughtful direction by Steven Soderbergh and a gorgeous black and white color palette.

Kafka is filmmaker Steven Soderbergh's 180-degree turnaround from his debut success sex, lies and videotape. A strange mixture of fantasy, horror and comedy constructed as a thriller, it stars Jeremy Irons as the title character, who is not specifically Franz Kafka but rather a Prague insurance salesman living around the turn of the century whose avocation, of course, is writing darkly bizarre stories. When his best friend's mysterious death is ruled a suicide, Kafka refuses to accept the police findings, and discovers that his friend was involved with an anarchist group plotting to overthrow the oppressive government.

Leon Silver
as Friend of Kafka

Zuzana Halustokov
as Friend of Kafka

Robert Flemyng
as The Keeper of the Flies

Emil Wolk
as Man Under Microscope

Josef Abrhám
as Friend of Kafka

Guy Fithen
as Friend of Kafka

Zuzana Halustokova
as Friend of Kafka

Ondrej Havelka
as Friend of Kafka

Lenka Korinkova
as Friend of Kafka

Petr Lepsa
as Friend of Kafka

Debora Weston
as Friend of Kafka

Jan Slovák
as Man at Bar

Dave Jensen
as The Laughing Man
View All

Soderbergh's talent is not in doubt; you can see, in the often elegant images shot by Walt Lloyd, a real filmmaker at work. But his choice of material is dubious.

The effect is artistic, but it's also obvious when the material cried out for unsettling.

A movie about Franz Kafka? It's a good idea for a microsecond. Then it dissolves into a dumb proposition.

Soderbergh does demonstrate again here that he's a gifted director, however unwise in his choice of project.

A stimulating blend of biography, hypothesis, interpretation and afterthought. It's a story about the 20th century.

It's surreal and paranoid, but a mostly underwhelming and tonally confusing watch.

There are shafts of insight, and the photography's elegantly expressionist. But Irons, sturdily English despite a fitting heaviness of the spirit, is hopelessly miscast as the iconic, neurasthenic writer.

All the Kafka basics are there for the literary types to muse over and it has great entertainment value in its unpretentious playfulness.

the film has a shallow, sophomoric earnestness

Mysterious and stylish but incoherent and empty, "Kafka" is a good-looking disappointment for director Steven Soderbergh. Impressive camerawork and snappy editing ensure that it won't be forgotten, but there just simply isn't enough going on to make it entertaining. The characters and story are dull, and on top of that, it's confusing.

Moody, mysterious, and measured thriller shot in beautiful black & white except for a pivotal sequence inside "the Castle." Soderbergh's best film is quite unlike any other in dropping Jeremy Irons, utterly convincing as Franz Kafka circa 1919 Prague, amidst a very Kafkaesque series of encounters. The insurance clerk's appointed assistants are two of the funniest oddball characters in film history. I last watched this 15 years ago until tonight and was completely reaffirmed why this remains one of my favorites of the 1990s.

Beautiful to look at but ever so slight.