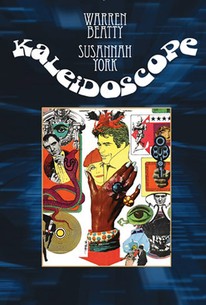 A cardsharp comes up with the ultimate system for beating the casinos at their own game in this high-style caper comedy. Barney Lincoln (Warren Beatty) is a footloose playboy with a taste for gambling and an ingenious scheme for winning at the leading casinos in Europe. Barney discovers that nearly all of the major gambling houses use playing cards manufactured by the same company; by breaking into their plant and subtly altering the printing plates, he's able to mark the cards with a code only he can read, and he is soon pulling in record winnings across the continent. However, Barney's secret is discovered by his girlfriend Angel McGinnis (Suzannah York), a successful fashion designer, which might not be a problem if her father, "Manny" McGinnis (Clive Revill) weren't a top inspector at Scotland Yard. Manny approaches Barney and makes him a deal -- he won't reveal his secret about the cards if Barney will help him catch Harry Dominion (Eric Porter), a high-level international drug trafficker. Unfortunately, Barney's sleuthing goes awry after a certain amount of initial success, and when Harry gets wind of what he's been doing, he retaliates by kidnapping Angel and demanding repayment of his loss of sales. Jane Birkin makes her screen debut in this film, appropriately enough as a character named "Exquisite Thing." ~ Mark Deming, Rovi

There are no featured reviews for Kaleidoscope at this time.