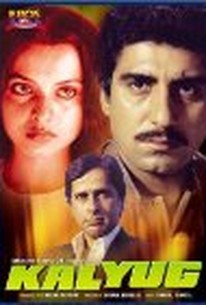 The title of this film is actually Kali Yuga, the worst of the four Hindu time periods in which morality and ethics are all but lost, wars and famines abound, and suffering is at its worst. Needless to say, it is our current time period -- due to last for a total of 432,000 years. Against this setting, a widow and her three sons are running a large industrial factory with the help of her brother-in-law, his son, and another top manager. The family starts to separate over business affairs, and then matters turn much worse as murder enters the picture. The underside of business expansion is revealed, with its attendant corruption and loss of ethics -- the kali yuga incarnate. ~ Eleanor Mannikka, Rovi

Kalyug was made by a dream team.

There are no featured reviews for The Machine Age (Kalyug) at this time.