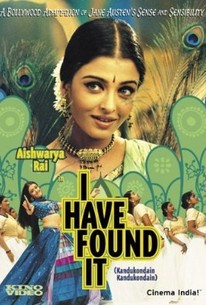 I Have Found It, Rajiv Menon's second feature, is an updated "Kollywood" (Southern India's Tamil-language version of Bollywood) take on Jane Austen's classic novel Sense and Sensibility. Tabu stars as Sowmya, the practical but pessimistic, levelheaded older sister, while former Miss World Aishwarya Rai (who also starred in the British Bollywood-style Austen adaptation, Bride and Prejudice) plays her romantically idealistic younger sister, Meenakshi. Sowmya has had a run of bad luck with potential suitors. This culminates in an embarrassing case of mistaken identity when Manohar (Ajith), a young filmmaker, arrives at her family home intending to ask permission to use it as a shooting location, and is mistaken for a prospective groom. Impressed with the young man's directness, Sowmya accepts his "proposal." Manohar finds himself drawn to the beautiful, depressive woman he's inadvertently humiliated, but insists on completing his first film before legitimately proposing to marry her. He has Sowmya pick his title ("Speed!"), but has a great deal of trouble finding support for his proposed suspense flick. For her part, Meenakshi is waiting for the perfect man to arrive and sweep her off her feet. She only tolerates the attentions of Major Bala (Mammootty), an older gentleman who lost his leg in battle, and owns a nearby flower plantation. He serendipitously encourages her to study music, but she falls for the younger, slicker Srikanth (Abbas), who quotes her favorite poetry, but disappears when his banking business runs into trouble. Acclaimed composer A.R. Rahman (Lagaan) did the music for the film. ~ Josh Ralske, Rovi

There are no critic reviews yet for Kandukondain Kandukondain (I Have Found It). Keep checking Rotten Tomatoes for updates!

Wow...I could have sworn that I rated and commented on this movie. Hmmm...oh well...here's an interesting movie with an all-around cast. Intriguing story plot that resembles a take on Austen's Sense and Sensibility. Aishwarya Rai and Tabu are absolutely fantastic in this one. Good music. Worth seeing.