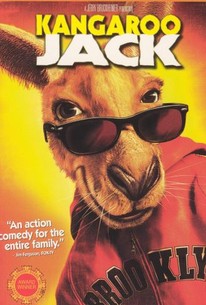 Critics Consensus: The humor is gratingly dumb, and Kangaroo Jack contains too much violence and sexual innuendo for a family movie.

Critics Consensus: The humor is gratingly dumb, and Kangaroo Jack contains too much violence and sexual innuendo for a family movie.

Critic Consensus: The humor is gratingly dumb, and Kangaroo Jack contains too much violence and sexual innuendo for a family movie.

Two low-level American crooks head to Australia, where they match wits with a kangaroo (who appears to have an intellectual edge on his pursuers) in this broad comedy. Charlie Carbone (Jerry O'Connell) is a hairdresser from Brooklyn whose best friend, Louis Booker (Anthony Anderson), scrapes together a living moving stolen merchandise. Charlie's stepfather, Sal Maggio (Christopher Walken), is a crime kingpin who has loaned Charlie a lot of money and wants to know when he'll get it back; Sal's not especially fond of Louis, especially after he and Charlie accidentally lead the police to a storehouse of burgled goods owned by Sal. Charlie owes Sal a big favor, and Sal wants Charlie and Louis out of his hair for a while, so Sal sends them to Australia, where they're to deliver a large amount of cash to a mysterious Mr. Smith (Marton Csokas). En route to their meeting in the outback, Charlie and Louis accidentally run over a kangaroo, and the half-bright tourists decide to dress the dead marsupial in sunglasses and Louis' favorite jacket for snapshots. However, the animal wasn't as dead as they imagined, and it soon hops away, shortly after Louis realizes the payment to Mr. Smith was in the pocket. Now Louis and Charlie are out to find the fast-moving critter, with the help of Jessie (Estella Warren), a wildlife expert; Mr. Jimmy (David Ngoombujarra), a wilderness guide; and Blue (Bill Hunter), a pilot familiar with the outback. ~ Mark Deming, Rovi

John Gibson
as Sal's Goon No. 1

Nick Jasprizza
as Sal's Goon No. 2
View All

A very bad movie -- shouldn't have been PG.

Brainless and inane, this is for undemanding kids only.

Parents beware: this film is too crude, violent and offensive for younger viewers.

It's a thin, tedious caper only notable for its impressive Outback locations and a cameo from Christopher Walken that proves the word 'no' isn't in his vocabulary.

A competent and workmanlike action-adventure romp for kids, briefly enlivened by a funny cameo from Christopher Walken.

Of course this American-made, Australian-set caper comedy is ten tonnes of terrible. How could it not be?

A ragged comedy that features much more lame slapstick action than bouncing beast.

Whatever reasons led to the creation and release of this sorry excuse for entertainment, parents looking for some weekend fun with the little ones can safely steer clear of Kangaroo Jack.

No one seems to have any idea whether this is an action movie, a comedy, a kid's movie or perhaps a bizarre experiment in kangaroo torture.

Remember when Jerry O'Connell had a future?

What a waste of time. Too dumb, too nonsense, too strong for a family entertaining picture, but probably in some decades this horrible thing could be rediscovery by others genarations and receive the title of a classic 'so bad that's good' cult following.

It has a few moments of great hilarity and Anderson in the supporting role is hilarious but the acting of everyone else is bad and it completely misses it's target audience. Kangaroo Jack is one of those stupid movies that try to suck it up to the parents by feeding them adult humour, but it's too gross for a movie like this. Or is it?

I don't know why people don't like it! I find it increadibly ammusing!