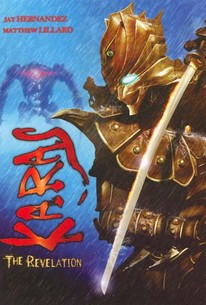 Old enemies clash and ancient secrets emerge as the prophecies come to pass in the final chapter of the Karas legacy. This is a world where Eko's armies pose an unparalleled threat, and the only hope for a thriving city is the appearance of a fearless new breed of warrior. Could the power of Otoha's sword prove any match against the crushing weight of human sorrow? With the future of humanity on the line, the ultimate battle will be waged in an animated adventure that marks the fortieth anniversary of Tatsunoko Productions and features the voices of Matthew Lillard, Jay Hernandez, and Cree Summer.

Critic Reviews for Karas: The Revelation

Androgynous young men with samurai swords face lumpy gangsters with guns while ethereal girl-wizards flit in and out through holes in the air.

Audience Reviews for Karas: The Revelation

There are no featured audience reviews yet. Click the link below to see what others say about Karas: The Revelation!