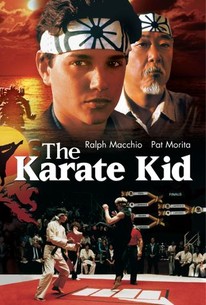 Critics Consensus: Utterly predictable and wholly of its time, but warm, sincere, and difficult to resist, due in large part to Pat Morita and Ralph Macchio's relaxed chemistry.

Critics Consensus: Utterly predictable and wholly of its time, but warm, sincere, and difficult to resist, due in large part to Pat Morita and Ralph Macchio's relaxed chemistry.

Critic Consensus: Utterly predictable and wholly of its time, but warm, sincere, and difficult to resist, due in large part to Pat Morita and Ralph Macchio's relaxed chemistry.

Newly arrived in California from New Jersey, teenager Daniel (Ralph Macchio) almost immediately runs afoul of karate-trained high school bullies. He is rescued by Japanese janitor Miyagi (Noriyuki "Pat" Morita), who agrees to teach Daniel how to harness karate for good instead of brutality. The film culminates in a championship karate bout, pitting Daniel against his sworn enemy Johnny (William Zabka) -- the cruel and thuggish boyfriend of Ali (Elisabeth Shue), with whom Daniel has fallen in love (and vice versa). Real-life karate champ Chuck Norris was offered the role of Kreese, the sadistic coach who goads Johnny into fighting dirty, but Norris turned down the role, refusing to be shown utilizing his skills negatively onscreen. Vastly popular, The Karate Kid spawned three sequels of rapidly descending merit, as well as a Saturday-morning cartoon series. ~ Hal Erickson, Rovi

Brian Davies
as Boy in Bathroom

Larry B. Scott
as Jerry

Frances Bay
as Woman with Dog

Brian Davis
as Boy in Bathroom

Scott Strader
as Eddie
View All

News & Interviews for The Karate Kid

View All The Karate Kid News

Critic Reviews for The Karate Kid

This film's art consists entirely of hiding the cynicism of its calculations under an agreeably modest and disarming manner.

Morita is simply terrific, bringing the appropriate authority and wisdom to the part.

A surprise summer hit in the States, this is another film-making-by-numbers exercise in teenage wish-fulfilment.

While this may be as soppy and predictable as they come, it still reminds you why you used to enjoy '80s teen flicks so much in the first place.

Formulaic, manipulative, hokey — and thoroughly rousing… the film's sincerity and poignance have a way of steamrolling over gaps in plausibility and logic.

An exciting, sweet-tempered, heart-warming story with one of the most interesting friendships in a long time.

The characters are unforgettable, the dialogue is clever, and although some of the sequences are predictable, the film never loses heart.

. . .The adventures of this vengeful boy only inspires indifference. . .[Full Review in Spanish]

Macchio rises above the trite script to deliver a sympathetic and believable performance. Morita is equally good value and look out, too, for Elisabeth Shue in an early role.

Upbeat, sentimental and predictable tale, but the acting of Ralph Macchio and Pat Morita (who was Oscar-nominated) is good and their friendship charming.

Avildsen crafted an inspired movie with the perfect mix of 80's bravado and 70's artistic integrity.

Audience Reviews for The Karate Kid

A fun, memorable and inspirational family film, The Karate Kid is a terrific film that will please viewers of all ages. This is a wonderful, accomplished film directed by the man who brought us the original Rocky. Avildsen's directing is effective and he knows how to craft the perfect underdog story and deliver something special on-screen. The Karate Kid is a memorable film because it has a strong message and it is inspirational because of it. The performances are great as well, and there's also comic bits thrown in t9o even out the dramatic elements of the film. This is a great film that is still worth seeing after all these years. Ralph Macchio is terrific here and Noriyuki Morita is flawless as Mister Miyagi. The film is almost perfect and it is a must see for viewers looking for a fun, dramatic family film that will certainly appeal to people of all ages. This is a near flawless film that is a good time from start to finish, and it has lot to offer despite a few lacking areas. Avoid the sequels as they try to recapture the memorable moments of this one, but ultimately fail due to poor plots, recycled material and a lack of effective acting. This is the one to watch and it is a film that has stood the test of time and is a must see if you're looking for a well crafted drama film with few moments of comic relief. Definitely a film worth checking out, and along with Rocky, this is John G. Avildsen's second best work as director.

every watch solidifies my feelings for this film that im sure ive seen a dozen times. my love for elizabeth shue is part of the reason i struggle with the sequels, due to her absence. the film is more depth and less stereotypical martial arts fare. i love this film.

The classic story of friendship and coming of age. Karate Kid tells the story of Daniel LaRusso played by Ralph Macchio who learns karate from his elderly caretaker, Mr. Miyagi, played by the late Pat Morita. It's a simple story, but it's very enjoyable. Along the way, Daniel falls in love with a girl named Ali played by Elisabeth Shue. Her ex-boyfriend, Johnny is the guy who constanly bullies Daniel by beating the crap out of him with karate. It happens a lot and Daniel is eventually saved by Mr. Miyagi. At first glance, Miyagi may not look like a threat, but when he beats up the bullies with his karate, he doesn't just beat them up; he shows them what real karate looks like: a good form of defense rather than another weapon. Miyagi agrees to teach Daniel karate, but with different techniques. Even if you haven't seen the movie, you have to be familar with "Wax on, wax off." If you're not shutting yourself in your room with the curtains drawn playing Call of Duty all day, then you will have heard that saying at least once. Another thing is that the movie is called the Karate Kid, but not all emphasis is put on Karate. One of the things the director spends time with is building the relationship between Daniel and Miyagi. Daniel doesn't have a father and Miyagi lost a son so they fill a viod for eachother. It actually plays out perfectly. Another thing I have to mention is the main villain. Not Johnny, but his karate sensei, John Kreese. He's played by Martin Kove and he's batshit crazy in his role. He constanly uses the term "No mercy" and he gets pleasure from seeing Daniel in pain. Why? For shits and giggles I suppose. He may be over the top, but it's in a good way. He's crazy and makes Hannibal Lector look like Mr. Rogers, but he's really fun to watch. There's one scene in the movie near the end where one of Johnny's friends is yelling in the background when Daniel and Johnny are fighting. He's going crazy and yelling a bunch of stuff like "Get him a body bag!" Every single time I see it, I just laugh my ass off. It might have to do with the fact that he is probably what Kreeses might've been like as a teenager. I remember once me and one of my friends were going to watch this movie at my house and it was his first time seeing it. After the movie was over he bought "You're the best" off iTiunes and spent about an hour and a half listening to it while practicing his crane kick. No joke, he's practically in love with the movie. I can see why. It has great acting, well choreographed fight scenes, a fun story, a perfectly pitched tale of friendship and fun characters. I extremely liked Daniel in this because he's from New Jersey and he' an average kid who wants to fit in. It was refreshing to see a Jersey character whose dialogue didn't consist of stuff like this: "Kiss my ass, fuck you! Imma go get drunk at the bar and start a fight!" "Buy some spray on tan and steroids while you're out!" "Fuck yeah I will. Maybe later us and the girls can have an eight-some."

It's a very predictable film. But it doesn't matter. Because the Karate Kid is one of the most heartwarming films ever made. With one the best screen couple's I have ever seen in the history of cinema. Its an irresistable underdog story of coming of age, love and redemption.