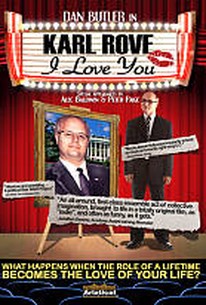 Can a gay character actor find happiness with a disgraced Republican powerbroker? The actor seems to think so, even if no one else does, in this satiric mockumentary. Dan Butler is an actor who becomes the subject of a documentary by Phil Leirness, who's eager to look into the career of one of America's best supporting actors. During an interview, Butler explains to Leirness that he's become fascinated with the career of Republican political strategist Karl Rove, as he's a "supporting player" in the George W. Bush White House but is also one of the most important figures in the administration. Butler decides to create and stage a one-man-show about Rove, but since he knows next to nothing about him, Butler's first step is to start doing some research. The more Butler learns about Rove, the more fascinated he becomes, until he's developed a head-over-heels infatuation with the former presidential advisor, which begins taking both his show and his life down an increasingly strange path, with Leirness along for the ride. Karl Rove, I Love You was conceived, co-written and co-directed by Dan Butler, who cut his teeth as a director helming episodes of the television comedy series Frasier, where he was a regular cast member.

Critic Reviews for Karl Rove, I Love You

The hilarity of the film lies in the fact that virtually nothing here is played for laughs.

Audience Reviews for Karl Rove, I Love You

There are no featured audience reviews yet. Click the link below to see what others say about Karl Rove, I Love You!

Karl Rove, I Love You Quotes