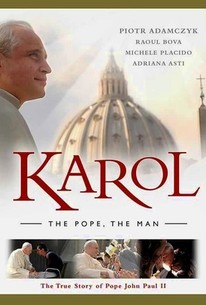 While the major American TV networks were jockeying to be the first to present a filmed biography of the late Pope John Paul II, cable's humble Hallmark Channel managed to beat everyone to the punch with the four-hour Karol: A Man Who Became Pope. Actually, this made-for-TV film was a Polish-Italian co-production, debuting on Italian television as Karol, un Uomo Diventato Papa on April 8, 2005, and subsequently released theatrically in Poland. Curiously, it had been filmed in English, so no dubbing was necessary -- thus enabling Hallmark to rush the production onto American screens as early as August 15, 2005. Piotr Adamczyk stars as Karol Wojtyla, whose tireless fight for humanity and basic fundamental rights begins with the German invasion of his native Poland in 1939. Appalled at the brutal treatment afforded his Jewish friends, Karol turns to religion as a means of making a difference in the world, and with the help of several other like-minded individuals mounts a nonviolent, but extremely effective, anti-Nazi resistance. Ordained as a priest at war's end, Karol finds himself fighting another form of godless totalitarianism, this one from the Communists who have overtaken his country. Ultimately, Father Karol Wojtyla's noble mission culminates in his being elected as Pope John Paul II in 1978 -- and it was surely no coincidence that Poland's liberation was now but a matter of time. Although A Man Who Became Pope looks lavish and expensive, it was very economically produced, and had made back its cost many times over before its acquisition by Hallmark. The film is also a "winner" in terms of its straight-on portrayal of the pontiff, and the commendably sincere, unadorned performances of virtually every actor in the cast. ~ Hal Erickson, Rovi

There are no critic reviews yet for Karol, un uomo diventato Papa (Karol: A Man Who Became Pope). Keep checking Rotten Tomatoes for updates!

There are no featured reviews for Karol, un uomo diventato Papa (Karol: A Man Who Became Pope) at this time.