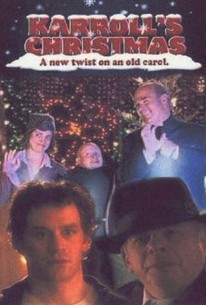 Just before Christmas, idealistic greeting-card writer Allen Karroll (Tom Everett Scott) cooks up a "special moment" wherein he will propose to his sweetheart Carrie (Deanna Milligan) in a public place before thousands of oohing and aahing spectators. Alas, Carrie turns him down flat, so thoroughly humiliating Allen that he ends up hating the Yuletide season. Not long afterward, Allen is visited by four disreputable-looking ghosts, including a very hip Jacob Marley (or is it Bob Marley?) Can it be that our hero has morphed into a latter-day incarnation of Ebenezer Scrooge? Not quite: All of the ghosts have come to the wrong address. Turns out that the real Scrooge of the piece is Alex's nasty next-door neighbor Zeb Rosecog (Wallace Shawn), who'd once been CEO for the company which employs Alex. His curiosity aroused, Allen overcomes his intense dislike for Zeb to investigate the source of the man's misanthropy--and in so doing learns a lot about himself. A clever spin on an all-too-familiar fable, Karroll's Christmas was produced for cable, and was originally telecast December 14, 2004 by the A&E network.

There are no critic reviews yet for Karroll's Christmas. Keep checking Rotten Tomatoes for updates!

There are no featured audience reviews yet. Click the link below to see what others say about Karroll's Christmas!