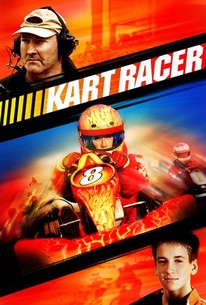 Canadian filmmaker Stuart Gillard directs the teen sports drama Kart Racer. After the death of his mother, Watts Davies (Will Rothhaar) lost touch with his kart-racing champion father, Vic Davies (Randy Quaid). When he becomes a teenager, Watts develops a desire to reconnect with his dad and to win the at the International Karting Federation regional championships. He especially wants to beat his rival, town bully Rodney Wells (Joe Dinicol). With the convenient help of previous karting champion Scott McKenna (David Gallagher) and the support of love interest Dahlia (Amanda de Martinis), Watts sets out to win his father's love and the big race.

Will Rothhaar
as Watts Davies

Johnny Griffin
as Toomey
View All

A sport film with lots of speedy thrills.

The only thing missing in this shameless pandering to 'tweenagers' is a crusade against homework.

It may just be a kid's movie, but in some ways that makes Kart Racer's incredible lack of originality even more of a crime.

A strong family film that should play well for young adults and their parents.

A compendium of wretched cliches that would only be tolerable to someone who has seen very few movies, or even TV shows, ever before.

There are no featured reviews for Kart Racer at this time.