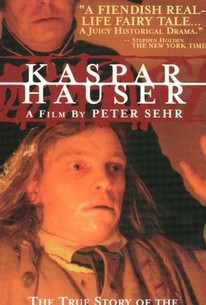 Director Peter Sehr offers here another version of the origins of Kaspar Hauser, one of the most enigmatic characters in German history. According to this film, the title character is the real son of Duke Karl of Baden. Karl's brother Ludwig wants the throne for himself so he secretly orders a dying baby to be exchanged for the newborn heir. The real baby heir is promptly sent with a nurse to the countryside, but then is kidnapped by the Bavarians who are antagonistic to Baden. After Ludwig becomes a ruler of Baden, the young boy is kept in a cellar by the Bavarians, and then in 1828, after 12 years of confinement, he is brought to a square in Nuremberg in the early morning and left there alone. Unable to talk or walk, the young man is given the name Kaspar Hauser and is brought to the home of the kind professor Daumer, who teaches him to talk and introduces him to a civilized life. However, while the tension between the two rival countries increases, Ludwig of Baden sends his spies to seek out and eliminate the missing heir. Unlike Werner Herzog's The Enigma of Kaspar Hauser, which treated the leading character as a mysterious man of the universe, this is a rather straightforward tale of political intrigue, where Kaspar is merely a pawn in someone else's wicked game, and the film barely rises above the level of a beautifully crafted costume drama.

Jan Skvar
as Kaspar as a Boy

There are no critic reviews yet for Kaspar Hauser. Keep checking Rotten Tomatoes for updates!

There are no featured reviews for Kaspar Hauser at this time.