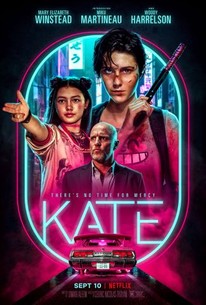 Meticulous and preternaturally skilled, Kate is the perfect specimen of a finely tuned assassin at the height of her game. But when she uncharacteristically blows an assignment targeting a member of the yakuza in Tokyo, she quickly discovers she's been poisoned, a brutally slow execution that gives her less than 24 hours to exact revenge on her killers. As her body swiftly deteriorates, Kate forms an unlikely bond with the teenage daughter of one of her past victims. Starring Mary Elizabeth Winstead and Woody Harrelson, and directed by Cedric Nicolas-Troyan, Kate follows a burned assassin's furious pursuit of one last self-appointed job.

Director Cedric Nicolas-Troyan makes great use of the Japanese setting and of newcomer Miku Patricia Martineau, who becomes Kate's unlikely local sidekick, but he might have done more with Woody Harrelson.

Kate gestures at being different, something fresh and subversive, but at the end of the day, it's just reheating old clichés.

Look, we get it, people are looking for new stuff to watch, mindless escapism included. Still, in terms of any sort of inspiration or originality, "Kate," the movie, is every bit as D.O.A. as Kate, the character.

The violence isn't quite ultra, but at least it adds some excitement to the otherwise lackluster script. Mary Elizabeth Winstead is a legit action star wasted by Netflix's Kate.

Its tired story and flat characterisations mean you're just counting minutes until the next shoot-out or sword fight.

It's got great fight choreography, wonderful performances from Winstead and Martineau, and a few clever twists, but ultimately the end of the movie left me wanting more.

Temper your expectations and don't look for originality in this vehicle and you're very likely to enjoy the ride.

A lean, sleek female-centric actioner from director Cedric Nicolas-Troyan that arrives with a bang, knocks your socks off for 90 minutes, and leaves you limp but weirdly invigorated.

The life expectancy for most of the unfortunate henchmen in Kate is instantly reduced to about a second or so once they run into the titular anti-hero of Cedric Nicolas-Troyan's ultra-slick, frenzied, hand-to-hand combat action ballet.

It felt too rushed and Winstead didn't work for me.

Winstead sells the carnage and keeps you invested in a screenplay that most film addicts can unfold in their heads during the first ten minutes. This is her action showcase.

There are no featured reviews for Kate at this time.