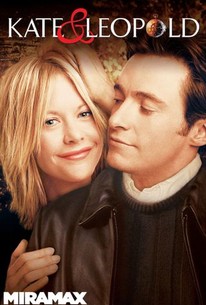 Critics Consensus: Though Jackman charms, Kate and Leopold is bland and predictable, and the time travel scenario lacks inner logic.

Critics Consensus: Though Jackman charms, Kate and Leopold is bland and predictable, and the time travel scenario lacks inner logic.

Critic Consensus: Though Jackman charms, Kate and Leopold is bland and predictable, and the time travel scenario lacks inner logic.

Filmmaker James Mangold follows his Oscar-winning drama Girl, Interrupted (1999) with this whimsical fantasy. Meg Ryan stars as Kate McKay, a modern female executive in New York City whose drive to succeed in the cutthroat corporate world has left little time for romance. When her genius ex-boyfriend Stuart (Liev Schreiber) opens a portal in time, the experiment transports Leopold (Hugh Jackman) from 1867 to the present day. A charming bachelor and the royal "Third Duke of Albany" in his own time, Leopold is fascinated by the 21st century. As the courtly Leopold and the decidedly liberated Kate tour the town, a mutual attraction develops into something deeper, a relationship that's threatened by Leopold's temporary chronological status. Kate & Leopold (2001) was originally developed by co-screenwriter Steve Rogers as a project for star/producer Sandra Bullock, who had a hit with his film Hope Floats (1998). ~ Karl Williams, Rovi

John Rothman
as Executive No. 1

Dennis Rees
as Executive No. 2

Michael Cassady
as Executive No. 3

Kevin Daniels
as Doorman at party

Some nice moments but overall not a total success.

Despite a promising premise, Jackman's Golden Globe-nominated performance remains the only tangible reason to see this movie.

Ironically, what jeopardises the transaction is Ryan.

Kate & Leopold is mostly harmless. Both Jackman and Ryan have a warm, delicate chemistry. Their affair is easily believable as the two delicately dance around love.

Kate & Leopold kicks off with an engrossing stretch detailing Jackman's character's exploits in the past and his initial discovery of Liev Schreiber's time-traveler.

It's rare to come across a time travel tale as listless as this one.

Though watchable, Kate & Leopold is a definite disappointment, particularly to anyone looking for the next When Harry Met Sally, or even the next French Kiss.

Nearly the only big-name romantic comedy to come out this year, Kate & Leopold is the perfect date movie this Christmas and the perfect way to escape from the stress of everyday life.

Kate and Leopold may occasionally miss the newspapers, but it has the heart and soul of a good-natured champion.

This movie is all kinds of weird, but I love it for that reason. Time travel and love stories have never been so eloquently put together like this. Hugh Jackman dominates the screen as Leopold, becoming the epitome of an English Gentleman who loves his good butter and tea. Meg Ryan also does a great job at making the humor work so well. It's almost like a British interpretation of Back To the Future, only with a lot of Margarine bashing.

Kate and Leopold made me think what would it be like, when something similar would happen to me. lol. A fun Movie.

for a rom-com/sci-fi, pretty lame.