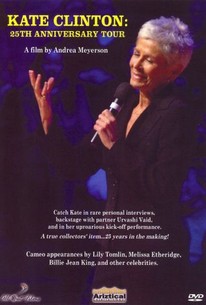 The self-proclaimed "Last Lesbian Comic Standing," Kate Clinton stands at the forefront of the lesbian movement thanks to her fearless, politically-charged humor and pointed insight into female sexuality. A former high school English teacher who walked away from her day job back in 1981, Clinton has since gone on to deliver twenty-five years of laughs. Now, in order to mark her Silver Anniversary as a performer, Clinton embarks on a fifty city tour entitled "It's Come to This" and sponsored by the National Center for Lesbian Rights. Now, as Clinton takes the Long Beach stage to target everything from gay cruises to the passing of the pope and proper attire for being spotted by surveillance cameras, both the longtime fans and the uninitiated alike will discover just what all the fuss is about. Inter-cut with the performance is a variety of personal moments that happened during the tour and were captured on camera - including backstage conversations with longtime partner Urvashi Vaid and footage captured during Clinton's public reading from her book What the L?.

There are no critic reviews yet for Kate Clinton: The 25th Anniversary Tour. Keep checking Rotten Tomatoes for updates!

There are no featured reviews for Kate Clinton: The 25th Anniversary Tour at this time.