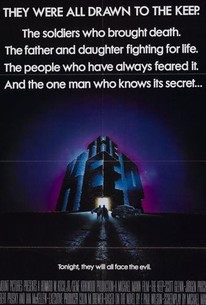 The Keep is an ambitious visual feast from director Michael Mann, whose previous effort was the moody, stylish Thief, and who would soon produce the quintessential pastel-colored '80s TV series Miami Vice. Adapted from the novel by F. Paul Wilson and set in German-occupied Romania of 1943, the film introduces the invaders to the dark presence lurking within the walls of an ancient fortress in the Carpathian Alps -- a presence which doesn't take well to unwanted guests. When soldiers under the command of Captain Woermann (Jurgen Prochnow) begin to die horribly, he receives the unwanted assistance of Nazi Major Kampffer (Gabriel Byrne), who immediately assumes command and forcibly enlists the aid of the local expert on ancient languages, the Jewish Doctor Theodore Cuza (Ian McKellen), in the translation of the cryptic writings left near a murdered soldier's body. When Cuza comes face-to-face with the Keep's ancient resident -- an ethereal creature which gains strength by draining the life-force from its enemies -- he forms a pact with the creature in the hope that it will escape and destroy Hitler's armies. When a mysterious stranger (Scott Glenn) arrives at the nearby village and befriends Cuza's daughter Eva (Alberta Watson), he reveals the true nature of the beast within the Keep, as well as his intent to destroy it before Cuza can release it -- a task which, if failed, will spell doom for all mankind. The film's fever-dream-logic casts a hypnotic spell -- ably assisted by Tangerine Dream's pulsating, ethereal music (including electronic variations on a theme by Thomas Tallis) -- with a story that seems to play by the Keep's own eerie supernatural rules.

Critic Reviews for The Keep

Mann must share the blame for the movie's failures. But nor should its beauties be denied.

As dated as it is, The Keep (1983), Michael Mann's second theatrical release after Thief (1981), remains an intriguing mess of historical provocation.

What the disappointing nevertheless fascinating visual film never clears up is all the confusion it leaves us with.

Great concept, great cast, stellar production values, and yet somehow Michael Mann - pound for pound one of the best filmmakers in the game - just can't bring it together.

The Keep is a worthy successor to a mode of horror, as morally unsettling as it is spiritually devastating, that threads through films like Murnau's Nosferatu and Lewton and Robson's Isle of the Dead.

After a brilliant opening act, the plot gets flabbier and flabbier until around the half-way point, when it stops making any sense whatsoever.

Only a pleasure if ye can handle the guilt.

Audience Reviews for The Keep

The fault lies with the studio hack job. We can only hope that one day we'll see Mann's true version.

Mann's second film and a controversial adaptation of Wilson's novel that didn't go down too well with either the audiences or the author. The film isn't particularly bad but there is obviously a lot of hack editing going on and much of the original plot has been ignored or cut. On the visual side the film is really quite cool looking, it almost looks like an early MTV rock video. The effects (for the time) were pretty swish and do hold the tone of the film together. There is a lot of visual flair with stylish lighting, camera angles, creepy claustrophobic vibes etc...which is one of the films saving graces, great atmosphere. Another plus point is the soundtrack by Tangerine Dream. As you would expect their usual blend of futuristic electronic synth mixed with that old fashioned ethereal/spiritual fairytale-like sound is very unique. Their music can evoke strong emotions from you the viewer . The only problem is this lovely soundtrack doesn't really fit this film. A lot of the tense moments don't really come across as being that thrilling because the music floating in the background just doesn't match the scenario. You would expect to hear a score of this tone for a film like 'Blade Runner'. The film is also confusing and rather unexplained, where as the original novel is straight forward (so I've read), so why is this film so messy? The evil entity that is released seems to be angry at the Nazi's for killing his people, so I'm guessing it was a Jewish entity? and if it wants to kill Nazi's why not let it? Also we don't find out where the entity comes from, what it really is, what's its purpose, who is 'Glenn', what is 'Glenn's' story etc... This isn't really a horror in my eyes, there isn't much blood or gore and its not scary in the slightest, it comes across as a slightly adult version of 'Raiders of the Lost Ark' really. The entity or demon is a bit comical to be honest, it should of been kept unseen really. The whole atmosphere in the film is perfect for the entity to roam around in the shadows but they don't really utilise that advantage strangely. The cast of big names in early roles also works in the films favour, check Ian McKellen in a 'pre-Professor X' type role and Gabriel Byrne as the sadistic German SD Sturmbannführer 'Kaempffer'. Of course being a film about the Nazi's you can't not cast Jürgen Prochnow, solid. I think first time viewers who have not read the novel will struggle with many questions being raised. I'm very sure the novel addresses many of the issues in the film...well I presume as I have not read it. But the blend of gothic horror set amidst WWII will keep most entertained and interested as it is well created and crafted.

With a little work, this could have been a truly great movie. However, the story just makes no sense and the characters have nowhere to go. About the only thing really good is the bizarre soundtrack from Tangerine Dream. Gabriel Byrne also makes for one ridiculously threatening Nazi. I really liked the basic concept of the soul-taking demon and wishthat Michael Mann took this to a higher level than just a random showdown at the end. Scott Glenn also makes no sense in this movie, he has little dialogue and all he did was have sex with the daughter of Ian McKellen and bleed Predator blood.

For so long, I yearned to see this film while not having access to it. Well I'll be damned if it wasn't on Youtube the whole time. Unfortunately the picture quality was in the dirt and the different sections seemed to be missing some transitional bits so I still don't know if I can say I've seen it 100%, but what I have seen was pretty good. It gets pretty crazy at times and the effects don't exactly hold up, but it works well enough. It was great to see young versions of Gabriel Byrne and Ian McKellen doing their typically good work. And of course Michael Mann does a good job as well with the direction. Certainly not his best film, but I'm glad now that I've seen it.