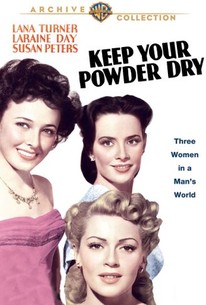 A disparate group of women join the Women's Army Corps to fight WW II in this upbeat war-time drama. One of the women is a frivolous debutante who is informed that she will not receive a dime from the family fortune until she can prove herself mature enough not to squander it on nightclubs and fancy cafes. She joins up with no intention of remaining a WAC; as soon as she gets the money, she is planning to leave. Another recruit comes from an Army family and sees no other recourse than to join up to. The third gal is married to a soldier and wants to be close to him. The army brat and the debutante constantly lob barbed remarks at each other leaving the wife to try to make peace. Things get even more out of hand when the Army brat gets promoted and begins abusing her rank. Things come to a head when the debutante slaps her and is brought up on charges. Meanwhile the wife is devastated to learn that her husband has been killed. Still she says nothing and instead tries to get her other two cohorts to make up. Ironically, it is the pain of her loss that brings the three together and cements their friendship and commitment to the Corps.

There are no featured reviews for Keep Your Powder Dry at this time.