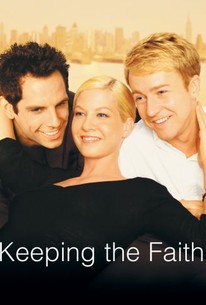 Critics Consensus: A dramedy featuring an unusual love triangle, Keeping the Faith is a perceptive look at how religion affects us in everyday life.

Critics Consensus: A dramedy featuring an unusual love triangle, Keeping the Faith is a perceptive look at how religion affects us in everyday life.

Critic Consensus: A dramedy featuring an unusual love triangle, Keeping the Faith is a perceptive look at how religion affects us in everyday life.

Actor Edward Norton debuts as a director with this comedy-drama about love, friendship, and faith. Priest Brian Finn (Norton) and rabbi Jacob Schram (Ben Stiller) have known each other since childhood. When Anna Reilly (Jenna Elfman), whom they both knew as children, returns to New York, both men find themselves infatuated with her, sparking both rivalry and personal dilemmas: Brian has taken a vow of celibacy, and Jacob is allowed to marry only within his faith. Award-winning director Milos Forman appears in the supporting cast, alongside Anne Bancroft, Ron Rifkin, and Eli Wallach; the screenplay marks the debut of writer Stuart Blumberg, whom Norton met when they were both undergraduates at Yale. ~ Mark Deming, Rovi

Sam Goldberg
as Jake (as a teen)

Blythe Auffarth
as Anna (as a teen)

Michael Charles Roman
as Brian (as a teen)

Kelly Deadmon
as Woman in Bar

Chris Gardner
as Basketball Kid No. 1

Santi Formosa
as Basketball Kid No. 2

Donna Hanover
as Woman No. 1 at Confessional

Wai Ching Ho
as Woman No. 2 at Confessional

Dagmara Dominczyk
as Claire
View All

News & Interviews for Keeping the Faith

View All Keeping the Faith News

Critic Reviews for Keeping the Faith

The film's distinction: it is neither dumb or vulgar, and its comedy comes from basic human emotions.

Classic romantic triangle for teens and up.

A romantic triangle dating movie as confected, and nearly as wholesome, as a '50s Universal bedroom farce, but lacking the confidence and zest.

The ending gets a little too cute, and isn't true to Anna's independent nature. Oh well, to forgive is divine.

It's as soft and squishy as anything by Nora Ephron or pre-caustic Woody Allen.

There are so many scenes in this film that make me smile.

It's light and affable, for the most part; it has a relatively novel premise, even if it's not really explored in depth; and it features three charming leads at a strong point in their careers.

So, a rabbi and a priest fall in love...

A slight and uneven but very charming romantic comedy.

Audience Reviews for Keeping the Faith

Ed Norton directs (say what!!!) this comedy built around, of all things, the opening of a joke ("Priest and a rabbi walk into a bar ..."). This effort is spiked with loads of cultural references and pithy one-liners, has enough charisma to win a war, so it is in its unbelievable premise finally that it falters.

"If you have to believe in something, you might as well believe in love." A story about two friends, a priest and a rabbi, who fall in love with the same beauty (Jenna Elfman)

REVIEW
Norton and Stiller are clergy (a priest and a rabbi, sounds like the start of a joke), Elfman is their friend who is secretly dating Stiller and who is secretly loved by Norton. What I think is most exceptional about this movie is the way it portrays these clergy as cool guys - I mean, there's really cool clergy just like there's really cool fireman and loggers and truck drivers. And it does so in a way that doesn't entirely compromise their faith, although some of the stuff Norton says or does is not quite right (and for the moment I'm not talking about his attraction to Elfman). I am also a huge Elfman fan, I think she's beautiful as well as extremely effective in her roles. Seeing this film made me wonder if Ben would be better served by serious roles more often, he's very effective and avoids the silliness and gross humor that can sometimes sabotage his comic performances. Nice supporting work by Bancroft and the always appreciated Wallach. Recommended for light entertainment.

I swear I have reviewed this before, Flixter must be deleting my old ones. This movie is a little too long but I enjoy it thoroughly, good messages.

This is a funny, romantic and very smart romantic comedy Edward Norton ever made in his debut directional. The three leads are charming and believable, the supporting cast is outstanding and the script is insightful and fresh. Norton is consistently one of the best actors working and here takes a role like no other he's played before, and Jenna Elfman is a real revelation: she's never been this beautiful, confident and intelligent before. She makes it very easy to see why both a priest and a rabbi would fall head over heels in love with her.