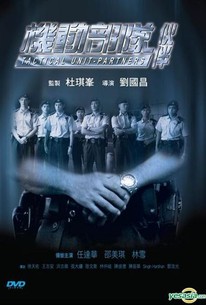 No where near as good as PTU, but pursues the units further exploits. Does have a nice subplot involving racism, but a bit of a yawn at times. For fans of PTU only.

Lawrence Ah Mon, who directed Tactical Unit: No Way Out, returns for another showing in the "Tactical Unit" series.

Tactical Unit: Partners is the 4th installment in this series, and while this film is only connected to the others because of the characters, the ones who view this will be those that have seen the films leading up to this one.

The pacing for this 90 minute picture is slow to moderate and this isn't surprising, since this crime drama is driven by the story and characters, not the action. The story itself is nothing really out of the ordinary, however this movie does get a little bland at times, while using race as one of its focal points.

While the cops are the star of this series, this movie gives time to a few other characters, while also integrating some other subplots into the story. Another thing to note is the frequent use of the English language, which the actors do speak quite well.

Simon Yam, Maggie Siu, and Lam Suet all reprise their roles, yet again, as the members of the police task force. All 3 of them have no problems pulling this off. The supporting cast is also decent.

Tactical Unit: Partners is a good watch for fans of this series, as well as Hong Kong crime thrillers. Just don't expect anything extraordinary.