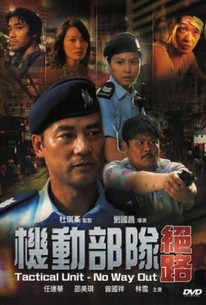 The tenuous balance between the law and the underworld is disrupted when triad gangsters get trigger-happy, and the police issue an immediate order to close down all illegal businesses in the region. Without a means of making a living, Gangster Fai must struggle just to get by. Before long, Gangster Fai is plotting his revenge on PTU, and laying out plans to reclaim the streets.

There are no critic reviews yet for Kei tung bou deui: Juet lou (Tactical Unit: No Way Out). Keep checking Rotten Tomatoes for updates!

Lawrence Ah Mon, brings the characters of PTU back for another crime drama adventure in Tactical Unit: No Way Out.

The "Tactical Unit" series is a follow up to Johnnie To's PTU. This film is the second film of this series. As usual, the story is stand alone, which makes this one watchable without having seen PTU or the first film in the series, Tactical Unit: The Code.

Unlike its predecessors, the plot for this movie shies away from the tactical unit characters and focuses a little more on one of the gangsters. This is where the film falters, because a good portion of the middle spends too much time on this character and creates a bit too much drama. Meanwhile, the tactical unit characters fade into the background until the latter parts of this 90 minute picture.

The action is pretty slim, which is not surprising, since this is how these films are written. It is the characters and story that carry this picture.

The usual suspects, Simon Yam, Maggie Siu, and Lam Suet return again to reprise their roles. Kwok Cheung Tsang steps in as the side character with too much emphasis. His acting is quite good though. Wu Li also plays a major supporting character.

At the end of the day, Tactical Unit: No Way Out is a decent watch for fans of the previous films.