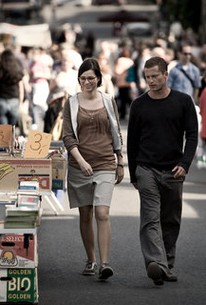 A womanizing, muckraking Berlin journalist meets his match in the unlikely form of a children's day care owner in director/star Til Schweiger's breezy romantic comedy. Ludo (Schweiger) and his photographer Moritz (Matthias Schweighoefer) cover the Berlin celebrity circuit with a flair that's truly all their own, but a bad night reporting on a high-profile engagement party ends in the devil-may-care reporter sentenced to 300 hours of community service at a local day care center run by his former classmate Anna (Nora Tschirner). Klutzy former geek Anna doesn't care too much for Ludo due to fact that he once humiliated her back when the pair were classmates, but Ludo was so busy impressing girls that he barely even remembers the incident. Now it's Anna's chance to get a little revenge, and she wastes no time in giving Ludo the toughest assignments that she can dream up. But later, when Anna notices that there may be more to Ludo than ego and conquest, this mismatched pair begins to grow closer than either could one of them could have ever anticipated.

Til Schweiger
as Ludo Decker

Jürgen Vogel
as Himself

Wladimir Klitschko
as Himself

Brigitte Zeh
as Nina
View All

There are no critic reviews yet for Keinohrhasen (Rabbit Without Ears). Keep checking Rotten Tomatoes for updates!

I enjoyed the bits that made fun of various celebrities... Especially JÃ¼rgen Vogel was hilarious. Apart from that a so-and-so romantic comedy with some truly funny moments. Nora Tschirner is extremely endearing, while Til Schweiger is great at outright comedy and not the best actor for the more serious moments. The imagery with Ludo's black-and-white world versus Anna's earth-coloured, warm world was a bit too simplistic, albeit visually effective. I am not a huge fan of the genre and felt entertained, so others might find this very enjoyable.

Already one of the big hits of German cinema for the year, this romantic comedy lives through his very charming characters. Especially Nora Tschirner as geeky kindergarten teacher and Matthias Schweighöfer as photographer fill their roles with so much life and humor that you wanna follow them around for a lot longer than these two hours. Til Schweiger is playing more or less himself, as always, the philandering asshole who is brought onto the right path by love. Still, most gags work pretty well and the soundtrack including The Killers and Bloc Party is outstanding. A really lovely and romantic comedy. To be fair, some of the gags might only be understandable for people who know German pop culture.