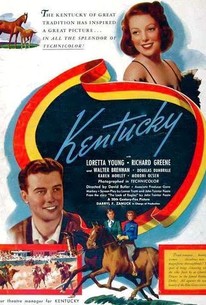 The blue grass of Kentucky was seen in three-strip Technicolor for the first time in this rambling racetrack drama. Sally Goodwin (Loretta Young) falls in love with Jack Dillon (Richard Greene), but the arrangement is complicated by a decades-old feud. Sally's uncle Peter (Walter Brennan, who won his second Academy Award for this appearance) has hated Jack's family ever since sides were chosen up in the Civil War. Jack secretly trains Peter's horse for the Kentucky Derby, causing the old man to nearly withdraw from the event out of pique. All is forgiven when the horse wins, but Brennan dies of the excitement, and his eulogy is read by a member of the family with whom he'd been feuding for nearly 70 years.

Charles B. Middleton
as Southerner

Meredith Howard
as Susie May

Kentucky is the first film I have seen which has been made by its colour.

There are no featured audience reviews yet. Click the link below to see what others say about Kentucky!