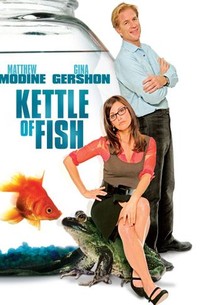 Opposites attract in the close quarters of a one bedroom apartment in this romantic comedy from first-time director Claudia Meyers. Mel (Matthew Modine) plays saxophone with a jazz band, and the only thing he's ever pursued with the same passion as his music is women, whom he loves and leaves on a regular basis. However, Mel has decided it's time that he finally made a commitment to something besides his pet goldfish, and agrees to move in with his latest girlfriend, Inga (Ewa Da Cruz). This means giving up his apartment, which Mel sublets to Ginger (Gina Gershon), a pretty but seriously geeky scientist who has come to New York from the U.K. to study the sexual habits of frogs. One day, while riding a ferry, Mel literally runs into Diana (Christy Cashman), a beautiful blonde wearing a wedding dress, and he immediately falls head over heels for her. The fact Mel has been hired to play Diana's wedding reception (not to mention the fact Diana fully intends to marry someone who isn't Mel) doesn't dissuade him from trying to court her, and Mel moves out of Inga's place and into his old flat. Trouble is, Ginger refuses to move out, and being forced to share the apartment doesn't agree with either of them. But before long, Ginger's frogs begin displaying an unusual attraction to Mel's fish, just as the free-spirited musician and the uptight scientist discover they have more in common than they thought. Kettle of Fish received its world premier at the 2006 Tribeca Film Festival.

Critic Reviews for Kettle of Fish

Myers's script follows the official structural steps of romantic comedy -- we won't belabor you with the details -- but doesn't always heed the most obvious one: Be original.

The film isn't believable for a second.

The film's leisurely pacing -- and Modine's overly laid-back work -- leave something to be desired.

Writer-director Claudia Myers' clunky debut feature makes the case that first-timers should probably focus on either writing or directing.

The first problem in Kettle of Fish, though by no means the last, is to imagine that by mussing up her hair, rumpling her clothes and accessorizing her with glasses and an ugly purse, you could ever make a believable wallflower out of Ms. Gershon.

It has its charms, and to those generally susceptible to well-done examples of genre, it'll probably be a delight.

Claudia Myers fills the movie with the rhythms, jokes and turning points of a sit-com or romantic comedy, making Kettle of Fish a delightful, funny, comfortable diversion

If only there were some spark between Modine and Gershon (who's hampered by an annoying and unnecessary English accent).

There is one truly great scene in this here movie and I'm not too sure if sitting through the awful-to-mediocre crap that precedes and follows it is actually worth the trouble.

Audience Reviews for Kettle of Fish

There are no featured audience reviews yet. Click the link below to see what others say about Kettle of Fish!