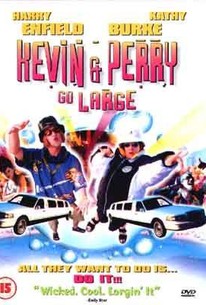 Beavis and Butthead, prepare to meet your English counterparts! Kevin (Harry Enfield) and Perry (Kathy Burke) are two 15-year-old boys whose desperation to lose their virginity is so great that it inspires a sort of awe. In the rare moments when they're not thinking about girls, Kevin dreams of being a singer, and Perry has ambitions toward becoming a dance music DJ. When Kevin and Perry manage to stop a bank robbery (please don't ask how), they're given a sizable cash reward, and they decide to go on a holiday in Ibiza, which is supposedly populated with thousands of beautiful women willing to sleep with anyone. However, after the boys pack plenty of sunscreen and condoms, Kevin's parents (James Fleet and Louisa Rix) announce that they're tagging along. Undeterred, Kevin and Perry make the trip and meet superstar DJ Eyeball Paul (Rhys Ifans), who may or may not listen to their demo tape. The boys also encounter Gemma (Tabitha Wady) and Candice (Laura Fraser), two scruffy teenage girls who are nearly as eager as Kevin and Perry to get horizontal. Kevin & Perry Go Large was based on characters that Harry Enfield and Kathy Burke created on Enfield's comedy series on British television. ~ Mark Deming, Rovi

Harry Enfield
as Kevin
View All

It's instantly forgettable, but perhaps contains a smidgeon of nostalgia value for those who were fans of the TV sketch.

The TV series was hiliarious...this is just damn embarrassing!

OK so I guess I should explain the background for this movie, for the non British folk. This movie is based on a silly comedy character created by British comedian Harry Enfield. Enfield had a comedy show on BBC2 way back during the 90's which featured a variety of his wacky outrageous characters. Enfield himself being a staple part of the alternative British comedy scene during the 80's and 90's. In the show the Kevin character originally started out as a feisty young boy under the age of 13. He was kinda spoilt, annoying, hyperactive and always wanted the latest toys, but essentially a fun-loving kid . Then in one episode its Kevin Birthday, he finally reaches his teens and morphs into a thoroughly obnoxious and rude teenage who screams at his parents and sulks a lot. Its at this point we meet the character of Perry (Kathy Burke), Kevin's best friend. Perry is a short chubby fellow with greasy hair, a pale complexion and what seems like a limited intelligence. During the series we follow Kevin and Perry and their various teenage escapades in small episodic bites of comedy gold. Much like any other TV character brought to the big screen the plot naturally has to be bigger, more flash in order to survive. With that the basic concept of Kevin the teen and his poor parents had to be expanded tenfold. So in a brilliantly ingenious bit of writing, Kevin, his parents and Perry (but not Perry's parents) all go off to Ibiza, Spain for a holiday after Kevin and Perry accidentally stop a bank robber and get a monetary reward. But the boys have an alternative plan in Ibiza, they plan on becoming famous DJ's in order to get loads of money and have lots of sex with hot birds. Yes it really is that simplistic, its almost like something from [i]The Beano[/i], but for adults. So apart from the fact this movie was based on a popular Harry Enfield character, something else was needed to lure in the crowds. And that something was hard hitting house & dance club music. Again for anyone not in the know, Ibiza was the mecca of clubbing back in the day (probably still is, unsure). A small island off the east coast of Spain that is somehow almost entirely devoted to clubbing. I think its pretty obvious what you can expect from this movie given everything I have told you thus far. Plenty of in-house footage from various famous clubs in the heart of Ibiza. Loads of scantily clad females dancing in cages and on the dance floor. Loads of beefy blokes dancing, and plenty of boozing and sexual innuendo from the main two lead characters. That's pretty much it really, Kev and Perry trying their best to get off with hot women who are out of their league. Whilst at the same time they both try to avoid Kev's crushingly boring and embarrassing middle aged parents. Easily some of the best scenes involve Rhys Ifans outrageously cuntish Mancunian character Eyeball Paul (he's called 'eyeball' because he takes in alcohol through his eye) . Ifans is absolutely spot on with this performance, he captures that Mancunian vibe with his accent, clothes and that hair perfectly, its almost annoying. The way he shamelessly abuses Kev and Perry whilst being a total misogynistic prick is a joy to behold. Ifans is clearly having a ball with this devilish character as he chews up the scenery beautifully. Shout out to James Fleet and Louisa Rix who play Kevin's poor parents (Rix being Kevin's mum in the TV series). These two capture the pain and suffering of a middle aged parental couple nicely. Those moments we can all relate to when your sad old parents would embarrass you; and now being middle aged myself, those moments when you cringe at the way teenagers show-off and behave around the opposite sex. Looking back its actually possible this movie could of inspired the now classic vulgar British teenager comedy show 'The Inbetweeners'. Its very clear how similar the two are by watching this now, Kev and Perry could easily be a part of the Inbetweeners gang. There are quite a few familiar elements such as almost every character being a cockney, strangely (apart from Eyeball Paul). The spot squeezing sequence with the girls is both utterly revolting and a typical Inbetweeners-esque type scene. The language used infuses both modern and classic British profanity such as 'shag'. And for some reason Kevin has a Union Jack bedcover, who has that?? Yes the comedy is somewhat deliberately sexist and chauvinistic, dated, highly childish and in places quite disgusting. Yes much of what you see is highly predictable, stereotypical and cliched. And yes we've seen it all before many many times. But at the end of the day this movie is essentially a time capsule from the late 90's. The clubbing, the music, the clothes, the hairstyles, the comedy and general attitude towards British middle class life etc...Its actually more of a trip down memory lane combined with morbid curiosity rather than a riot of comedy. That's not a bad thing though as I did find myself kinda enjoying the trip.

i love it, its funny but stupidity funny and it captures teenagers really well it really is a lol comedy

These kids were weird dudes. I found them gross and not very funny. I couldn't get into this movie.