The Keys of the Kingdom1944 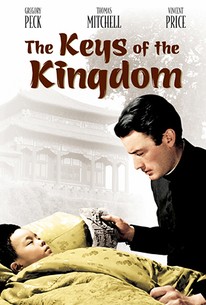 The Keys of the Kingdom Photos

Based on the novel by A.J. Cronin, The Keys of the Kingdom was the first big-budget effort of movie-newcomer Gregory Peck. This is the 137-minute chronicle of a Scottish priest (Peck), who is assigned a mission in China. Never very focused in his life or work, the priest finds plenty to keep his mind occupied in his new post; when he isn't coping with the starvation and poverty plaguing his flock, he must contend with China's bloody civil war. Nonetheless, he perseveres, and finds it difficult as an elderly man to retire. He returns to Scotland, where he finds a new purpose in life; that of ministering to youngsters who, like him, have trouble determining their place in the world. Keys of the Kingdom was one of the last 20th-Century-Fox films produced by Joseph L. Mankiewicz before his career-shift to directing; Rose Stradner, Mankiewicz' then-wife, has an important role in the film.

Peggy Ann Garner
as Nora, as a Child

James B. Leong
as Taoist Priest

Critic Reviews for The Keys of the Kingdom

Peck's star-making turn… earned him a Best Actor nod and established his screen persona as a ruggedly decent, dignified underdog.

With the help of an Oscar nomination, Gregory Peck becamea major star after appearing in Fox's religious bio-epic, in which he plays the heroic Scottish priest, Father Francis Chisholm.

... a beautiful and uplifting story with uniformly strong performances from its brilliant cast.

Audience Reviews for The Keys of the Kingdom

Peck is wonderful as a priest in the midst of difficult places and times. The "China" story and the "youngsters" story both serve to bring out new elements in Peck's character.

Young Scottish priest Peck goes overseas to convert the people of China to Catholicism ... disagreeing with Church authority types about the so-called heathen status of those "inscrutables": he thinks of them as human beings! This bit of Hollywood liberal radicalism from the 40's got Peck his first Oscar for his portrayal of quiet dignified humility in the face of a world that doesn't care. Gwenn, Mitchell and Price do typically well in the supporting roles. A nice afternoon show.

This movie has a good story, but it is too long, and we don't get to see Vincent Price enough, which is one of the reasons I wanted to see the movie. It could have been better if the story was shorter and a little more exciting.

Nice story of a man of great faith and his journey in the face of much opposition on the path that he feels is the right one even as others try and fight him. Gregory Peck, whose innate dignity was one of his strongest assets, is perfect in the lead and he is surrounded by a wonderful cast, the kind that was only available during the studio system days.

The Keys of the Kingdom Quotes