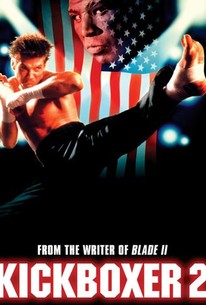 Kickboxer 2: The Road Back Photos

This sequel to the popular Jean-Claude Van Damme vehicle centers on the exploits of David Sloan (Sasha Mitchell) the younger brother of the two fighters (Van Damme and Dennis Alexio) who died in the first installment. As this episode begins, David has given up competition and is running a kickboxing school for underprivileged urban kids. His life changes abruptly when the villainous fight manager who murdered his brother shows up and forces him back into the ring. Fortunately, David's Zen master shows up for spiritual and moral support. The ensuing fight scenes are quite bloody and violent.

Chance Michael Corbitt
as Kid in Gym
View All

Critic Reviews for Kickboxer 2: The Road Back

Even the cultivated sportsmen who fill the end zones at Raiders games might find this bloody, sadistic display of mayhem beneath their entertainment standards.

Kickboxer 2 is better than Kickboxer, the 1989 Jean-Claude Van Damme vehicle that spawned it. But you have to realize this is a relative judgment, since that first movie... is widely regarded as a cinematic disgrace.

Kickboxer 2 explores much the same territory as its predecessor, although this time there's no Jean-Claude Van Damme, who by the time this sequel was made had moved on to bigger (though not necessarily better) things.

This blood, which seems to change color and texture every time it shows up, keeps coming and coming as if it were a substitute for dialogue. The scenes outside of the ring are even more excruciating.

Kickboxer 2 is laughable fun. It's got cheesy 80's style motivational music (you know the kind that worked for Rocky), over-the-top action sequences and cardboard thin performances - but all in all it's still a good boys boast.

Audience Reviews for Kickboxer 2: The Road Back

quite an interesting followup to Van Damme's original. I'm was confused by the idea of having Tong Po coming back to exact revenge on the sloane family. David Sloane is more believable in the lead then Van Damme but he lacks the fight training which made the first film really work. The film has much more depth then the first and is much more serious. the original had a sense of humour which worked into the films audience while this one clearly was in a darker place considering the revenge plot. The film has so much more going for it then it gets credit for, I enjoy watching this film along with the first as they are connecting story lines. The film would be the last kickboxer film to be any good as the series quickly went down hill from here. Sasha Mitchell was not a Van Damme which ultimately alienated the audience who wanted a remake of the first. he is likable and got better at he's fighting as the series went along. He definitely should have put all he's eggs into this basket as the rest of the films went straight to video

ok for a sequel without the original star

Kickboxer 2: The Road Back Quotes