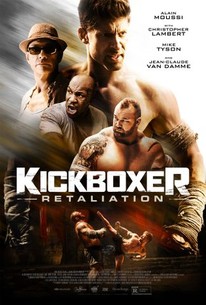 One year after finding vengeance for his murdered brother, MMA champion Kurt Sloane finds himself back in Thailand--kidnapped and imprisoned there by a powerful gangster (Christopher Lambert). His only shot at freedom is to win an underground death match against a 400-lb. killer enhanced with state-of the-art drugs (Game of Thrones' Hafþór Júlíus Björnsson). To make it out alive, he seeks training unlike anything he's ever endured, with the help of the legendary Master Durand (Jean-Claude Van Damme) and fellow prisoner Briggs (Mike Tyson).

Sam Medina
as Crawford
View All

A stylish and enjoyable fight flick with just enough tongue-in-cheek content to keep us smiling.

A very dumb, and very satisfying throwback to a simpler time when American action films were as predictable as they were formulaic.

[A] slam-bang exercise in sequelitis.

Unlike the last movie, which stumbled when outside the ring, [the director] doesn't bog things down with too much plot about fraternal bonding, love interests, or anything that requires an emotion more complicated than punching someone's lights outs.

There are smarter and more original action films to watch in the world, but few, trashy or earnest, are this consistently entertaining or brute force in their own honesty.

As it progresses, scene after scene in Retaliation are infused with this crazy little thing called "fun", and Moussi feels much more at home than he ever did in the first movie.

This film feels like watching a series of fight sequences that are loosely connected by a wafer thin plot.

Isn't trying to change the action movie game or shake up the martial arts sub-genre. It's just a simple, easy to digest film with a slew of incredible fight scenes.

The bar has been raised forKickboxer: Retaliation, this time directed by the previous film's writer/producer, Dimitri Logothetis, and it shatters the bar with a leaping Van Damme spin kick

Comes the closest to recapturing the wide-eyed, bone-crunching fun of the 1989 hit, inching away from darkness to reclaim the brand name with a lively offering of bodily harm.